Region committee has turned down a proposal to accept bottom ash from Peel's energy-from-waste facility in Halton's landfill.

The planning and public works committee endorsed a motion to that effect Wednesday. Region staff had recommended the bottom ash -- an inert byproduct from the incineration process that's collected from the bottom of the furnace -- be trucked to the Halton Waste Management Site to use as a daily cover, which is a material placed over the garbage in the landfill each day to control things like blowing litter.

Ladies and gentlemen, I give you P.O.W.E.R.:

Before passing the motion, the committee first heard from two local residents' groups -- Protect Our Water and Environmental Resources (POWER) and Oakvillegreen. Both are strongly opposed to using the bottom ash at the local landfill.

"It makes no sense to choose cover that contains toxic material," said POWER past president Barbara Halsall. "Vote no on this report."

"Bottom ash is not adequately tested and may pose health and environmental hazards," she argued. "There doesn't appear to be any benefit to Halton citizens."

1) Bottom ash from incinerators has been tested and re-tested for decades by every country that uses waste incinerators. The most hazardous thing about bottom ash is the presence of metals like zinc and lead, but these are tested for regularly and are well below the levels that could pose any risk to the environment even if they did manage to leach into the soil. Which they probably couldn't because...

2) This is a LANDFILL. It is full of GARBAGE. In fact, it is full of exactly the same kind of garbage that is being burned to produce the bottom ash - except that in an incinerator all the really toxic crap is either burned off or removed with the fly ash.

In other words, bottom ash is considerably less toxic than the garbage it is being used to cover. If you dared me to I would probably eat it. Saying it ‘may be’ hazardous is like saying is like saying the earth ‘may be’ hollow or the moon landing ‘may have been’ a hoax - just because someone said so on a website doesn't make it true.

Yet despite all evidence and rational analysis, those who believe these things can simply point to ‘studies’ by the one or two people who agree with them, and dismiss the overwhelming scientific consensus to the contrary as part of a vast government and corporate conspiracy to poison them and their children. And they always manage to talk the local politicians into going along with them because face it - would you vote for a guy who wants to poison your children? 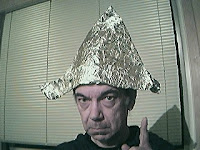 This sort of thing is particularly endemic to Milton for some reason. Over the years, various factions of the local ‘That Shit’ll Kill You’ CoalitionTM have come out against lawn pesticides and cell phone towers, and for decades have managed to preserve Milton as one of the last remaining municipalities in Canada without water fluoridation - thus guaranteeing it’s perpetual dominance as the Dental Decay Capital of Halton. Hell, when I first moved here 14 years ago they didn’t even chlorinate the water. Just ask the people of Walkerton how dangerous they think chlorine is.

(And please - do NOT just run out and Google up a bunch of links to send me proving that this shit really will kill you. I've seen it. It's rubbish.)

Now, I should mention here that POWER is not nearly as irrational as some of the other citizens groups which have formed themselves around such imaginary threats. In fact, POWER does some good work on escarpment water quality and pushing back on local quarry expansion, which makes their bizarre obsession with marginal issues like this so frustrating. Not only does it damage their credibility by making them look like a bunch of ‘nimby’ crackpots, but the best they can hope to achieve is to banish these projects to neighbouring jurisdictions, making them someone else’s problem while still affecting us here in Milton.

Worse, they may well be damaging the environment by actively discouraging potentially beneficial technologies like energy-from-waste incineration.

In trying to figure out just what motivates an otherwise rational person to suddenly decide that cell phone towers cause brain cancer or that public water fluoridation is a chemical industry plot, I thought I’d Google the words ‘environmental’ and ‘hypochondria’ and see what popped up.

Looks like I’m not the only one to make this connection.

Unfortunately, the perceived line between legitimate and imaginary or exaggerated environmental hazards can be pretty thin unless you actually examine all that complicated sciencey stuff, so the term ‘environmental hypochondria’ is used pretty freely by anti-environmentalists to bash any and all environmental legislation. However, I did run across a fascinating article in ‘The Environmental Practitioner’ that takes a serious look at the problem from an environmentalist’s standpoint (emphasis mine).

As a general environmental practitioner, I have encountered many environmental hypochondriacs over the years, most of whom fall into one of the following categories:

1. Clients, generally promoting major projects, who have a limited appreciation of environmental issues, are concerned about threats to the project caused by bureaucratic delays or legal challenges, and are prepared to pay the necessary price to eliminate such threats.

2. Members of the community opposing a development for environmental reasons. In some cases the environmental hypochondria reflects genuine concern based on ignorance and sometimes fuelled by provocative or imaginative media reports. In other cases, it is contrived as an excuse to mask the real reasons for such opposition, which may relate to real estate prices or basic ‘nimbyism’. Such contrived concerns can be compared with the child who feigns illness to avoid having to go to school.

3. Staff of consent or advisory authorities who either lack the professional experience to make confident decisions in relation to environmental issues or, like the community- based malingerers, deliberately play up their concerns to support a hidden agenda of personal or institutional opposition to a proposal.

I may just run off a few copies of that article and hand them out at the next Halton Regional Council meeting.
Posted by Jennifer Smith at 11:09 AM