Someone had to say it, so it might as well be me 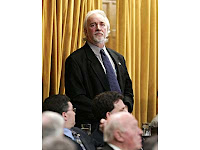 Chuck Cadman was a great and honourable man, and the allegations that the Conservatives offered a dying man financial inducement in return for his vote is an extremely serious matter.

It is therefore with the utmost respect for the man's legacy and in full recognition of the gravity of the situation that I propose the following catchy term for this egregious scandal.

Ladies and gentlemen, I give you...

(This is an official declaration of DIBS. Unless another blogger can offer evidence of prior reference, all subsequent use of the term 'CadScam' must henceforth be attributed to me, Jennifer Smith, aka 'runesmith' and be linked back to this blog at runesmith.blogspot.com)

On a more serious note, I thought it was rather sad watching a steady procession of Conservatives, including the PM, insisting that Chuck Cadman himself had publicly denied to the Duffinator and all of Canada that the Conservatives offered him any sort of inducement other than the magnanimous offer to take him back into the Tory fold.

Let's just listen to that interview, shall we?

In case you missed it (about four minutes in), this is how the exchange went:

Duffy: "Craig Oliver reported... that the Conservatives offered you an unopposed nomination if you would vote with them, and also help with campaign financing and so on. Was that offer actually made?"

Cadman: "Well, there was some talk about that. As far as an unopposed nomination, you know, the discussion did come up, the talk did come up, yeah."

Duffy: "So they were making and offer to you and in the end you refused."

Cadman: "Yeah, well, you know, that was the only offer on anything I had from anybody, you know, there was no offers on the table up to that point about anything from any, uh, from any party."

Maybe I'm missing something, but I can't see how that could possibly be interpreted to exclude the notion that he was offered additional inducements from the Conservatives - only that he never received any other inducements from any other party.

This, on top of the fact that Cadman's wife and daughter have both confirmed that Chuck told them about the million dollar life insurance offer.

It's anybody's guess as to whether this scandal is going to actually grow legs, but I can tell you one thing: I'll bet Stephane Dion is really wishing this story had broken about two days ago.
Posted by Jennifer Smith at 12:21 AM

Email ThisBlogThis!Share to TwitterShare to FacebookShare to Pinterest
Topics: CadScam, In The News, Politics