Of Red Dogs and Radicals

It looks like I'm going to lose another bet.

The last time I put money on the outcome of anything political was about 28 years ago when I bet my little sister ten bucks that the Americans couldn't possibly be stupid enough to elect a creepy, geriatric, uber-conservative warmonger as President.

This time I bet my husband twenty bucks that we'd see a spring election. Sigh.

Despite all the shrieking and wailing from the progressive blogosphere yesterday, there is just no getting around the fact that this is a budget the Liberals simply cannot vote against. If they did, the Conservatives would just spend the next thirty-six days asking why Dion brought on an election by voting against his own policies.

This is, of course, precisely the intended result - just as it was when Harper suddenly softened his stance on Afghanistan and adopted what was essentially the Liberal position. Unfortunately, he has only been able to do this because the Liberals themselves have drifted so close to the centre that they are in mortal danger of tipping over to the right.

When the Reformers killed the Progressive Conservative Party and stole their identity, they left a vacuum in the centre-right, so it would seem only natural that the Liberals be drawn in that direction. Unfortunately, that leaves a vacuum on the centre-left, resulting in the entire ship listing dangerously to starboard.

As an old Trudeau girl with leftist leanings, I find this shift alarming. But many Liberals with far more influence than I see this as a good thing. I'm sure my ex-PC MP does. 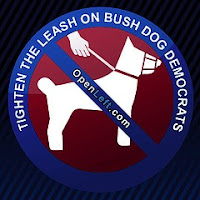 This strategy of playing the middle in order to broaden the base has been used for years by the centrist wing of the Democratic Party in the U.S., popularly known as the Blue Dog Democrats (or sometimes as 'Bush Dogs'). It seems like a sensible strategy on the face of it, especially if your main goal is to get re-elected. However, in the U.S. it led to the unsightly spectacle of House and Senate Democrats continuing to vote in favour of billions in Iraq war funding and unlimited extensions of the Patriot Act, despite holding a majority in both houses.

It took a while, but the level of disgust among the party's grassroots at this sort of unprincipled political pandering seems to have finally risen sufficiently to bite centrist Hillary Clinton in the ass. Unfortunately, it took eight years of George W. Bush to get them there.

From all accounts, Stephane Dion is no Blue Dog - or in this case, Red Dog. He's a principled progressive with a clear vision of what he wants Canada to be. But whatever his principles may be, he doesn't yet have enough support from the party's grassroots or the old guard to make a firm stand on anything, least of all the party's position in the political spectrum. And that may be just the way the Liberal Red Dogs like it.

From my comfy spot in the cheap seats, I would say that Dion's biggest tactical error this week wasn't Afghanistan or the budget, both of which were carefully engineered to be unassailable. No, his only legitimate shot at triggering an election would have been to allow the Senate to thumb it's nose at Harper's arbitrary deadline on passing his omnibus crime legislation. Why? Because it would have put the responsibility and the blame squarely in Stephen Harper's court.

Conventional wisdom is that nobody wanted to trigger an election over a fight between the House and the Senate, and that the obvious impropriety and possible constitutional violation in Harper's demand that the Senate bend to the will of the House would be completely lost on most Canadians.

Despite decades of western Reform propaganda, the fact remains that the average Canadian's principal complaint against the Senate is that it is redundant - merely a rubber stamp to legislation already passed by the House. By showing a little spine and refusing to be bullied into passing some deeply flawed crime legislation transparently based on failed U.S. policies, the Senate would have been seen to be doing its job, and would have been admired for doing so.

You can blame the Liberal party establishment for allowing Stephen Harper to back them into a corner over Afghanistan and the budget. The Liberal abstentions in the Senate yesterday rest squarely on Stephane Dion's shoulders.
Posted by Jennifer Smith at 8:35 AM