Arnie vs. the U.S. Government: Round Two 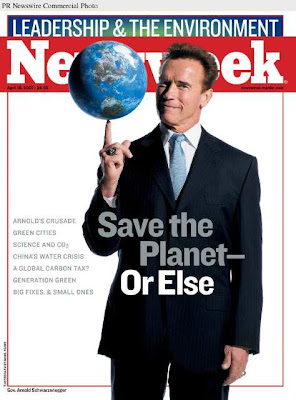 The Governator is at it again.

After putting his state way out front in the battle against global warming by legislating strict GHG emission standards on cars in California (and fighting the EPA and the federal government tooth and nail to do it), Arnie is taking the same approach with another environmental issue:

Once again, the California state government of Arnold Schwarzenegger has stuck its neck out for the environment. Amidst federal movement toward a continental approach to toxics regulation -- the so-called "Montebello Agreement" -- California is exploring "a wholesale shift" in the way industry manufactures everything from prescription drugs to plastics, pesticides and household cleaners.

"In an effort to reduce industry's reliance on toxic compounds, state environmental officials today will lay out a framework for transforming California into a leader in the development and use of 'green' chemicals," wrote the Los Angeles Times last week.

"The goal is to blast California way ahead of the world," Maureen Gorsen, director of the Department of Toxic Substances Control, told the paper. "We're trying to develop an entirely new state policy framework to move California to a... sustainable society. No government's ever done that."

You know, if he keeps this up they're going to take away his key to the Republican bathroom.

You can guess which model the Bush and Harper governments prefer.

From the sounds of it, Arnie is going to have a fight on his hands over this one as well. The chemical industry is lobbying hard against European-style regulations and encouraging the U.S. government to "preempt state laws on chemicals" - just like the auto industry lobbied against a "patchwork" of state laws on GHG emissions. And even assuming a regime change on both sides of the border within the next year, I'm not naive enough to think that these corporate interests are going to lose their political influence any time soon.

The irony is, the chemical industry is already adapting itself to a greener way - partly because of stricter European regulations and partly because of the soaring costs of petrochemicals. But with the American economy tanking and many Canadian businesses looking to Europe to help soften the blow, our government's regressive attitude towards regulatory policy might just shut us out of the European market altogether. At which point the Americans may just go from being our largest trading partner to being our only trading partner.

Now there's a cheery thought.
Posted by Jennifer Smith at 11:55 AM