Get Out of My Head, Naomi Klein!

There was a somewhat cheezy but strangely memorable science fiction movie back in the ‘80s called ‘They Live’. It was about a guy who finds a pair of sunglasses that allows him to see subliminal messages in billboards and magazine ads, as well as the true faces of the yuppies and power elite who turn out to be hideous aliens trying to take over the world.

That’s what I feel like after reading Naomi Klein’s ‘The Shock Doctrine’.

I can’t read or watch the news any more without zeroing in on terms like ‘public/private partnerships’ or asking myself which multinational corporations are going to make a killing this time.

Even watching that ‘Killer Wave’ mini-series last week, I immediately recognized that the likely culprit behind these man-made Tsunamis had to be some mega corporation that stood to profit from providing reconstruction services to devastated coastal communities. Because really, it’s not that big a stretch to go from disaster capitalism to disaster creation, right?

Or take this bit of news:

The "ideology" of the federal Conservatives is needlessly delaying the extension of the Spadina subway north into York Region, Mayor David Miller charged yesterday, accusing the government of demanding a "crazy" financial review of the project.

But no cheque from Ottawa has been signed, Mr. Miller said, because the federal government is forcing the Toronto Transit Commission to review the project in order to determine whether the private sector could be more involved in a so-called public-private partnership.

There’s that word again: ‘private’. Meaning corporate. Meaning the use of millions of our tax dollars to enrich the shareholders of whatever corporation gave Harper the most money last year so they can sub-contract the job out to the lowest bidder who will pay the lowest wages they can and use the cheapest materials available to do the most half-assed job they can possibly get away with. It’s just like the IMF did in Bolivia when they demanded the privatization of their water system as a condition of…

Put on the glasses, man. It'll change your life.
Posted by Jennifer Smith at 12:51 AM 2 comments:

And Then There Were Two

Australia’s long dark teatime of the soul is finally over. 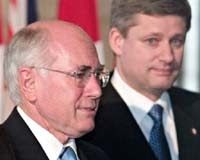 Prime Minister John Howard - neo-con, monetarist, xenophobe, racist, warmonger, global warming enabler, and all around Bush toady - has lost the election to Kevin Rudd and the Labour Party. Right now it looks like Howard will even lose his own seat.

Goodbye, good riddance, and don’t let the House door hit you in the ass on the way out.

Rudd has his work cut out for him, and has already announced that he’ll be ratifying Kyoto and pulling Australian troops out of Iraq as soon as possible. Good luck to him. Here’s hoping eleven years of Howard’s Friedmanite economic policies don’t take as long to recover from as, say, the Harris experiment in Ontario. The damage to the global environment, Aboriginal treaties, Iraq, and Australia’s international reputation might take even longer to fix. 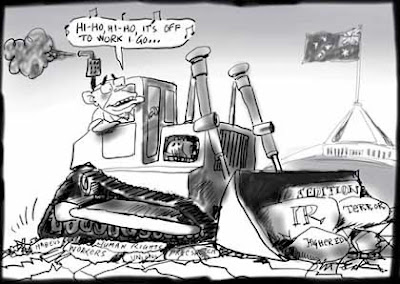 So, let’s see. Blair is gone, replaced by the much more sensible Gordon Brown. Howard is toast. That leaves… Stephen Harper as Bush’s one and only true and bestest friend.

Any bets on which one goes down next?
Posted by Jennifer Smith at 12:00 PM 2 comments:

Email ThisBlogThis!Share to TwitterShare to FacebookShare to Pinterest
Topics: Australia, In The News, Politics

A good comic actor makes you laugh. A great one makes you cry. Charlie Chaplin was the all time master, but I can’t think of anyone of this generation who can play the sad clown as convincingly as Steve Carell.

Not only did I fall in love with Dan the lovesick widower, I’ve decided that I want to spend the holidays with his family. The whole clan is charming and raucous and thoroughly into each other’s business in an utterly benign and loving way. And yet somehow they still manage to seem like a real family.

No mine, of course.

The whole movie is infused with the music of Sondre Lerche, a somewhat obscure Swedish songwriter and performer who sounds suspiciously like Rufus Wainwright. The music sets exactly the right tone - sweet, quirky, and completely out of the ordinary.

I laughed. I cried. Four and a half out of five.

(and Murray liked it too!)
Posted by Jennifer Smith at 1:05 PM No comments:

I wanted to apologize for the lack of posts over the past week or so.

I've recently had every waking thought consumed by simultaneous but unrelated personal problems resulting from
a) a two and a half year old legal nightmare thought to be resolved that has suddenly risen from the dead, and
b) having a teenaged son.

Between the two I can barely sleep, I feel nauseous all the time, and I am seriously considering dropping my amateur status so I can start drinking professionally.

On the bright side, I've lost five pounds.

I've had a bunch of post ideas surface and even made some notes, but I just can't seem to focus long enough to put a coherent thought together. So until my life and my stomach settle down again, here are some random links to interesting articles and blogs I've run across recently: