Campaign Lessons Learned: What Would Don Draper Do?

A municipal campaign is perhaps the purest form of politics there is. There is no Party, no political machine at your back - just you and the voters.

I didn't get the whole 'campaign' thing before. Not really. Not even after having been fairly deeply involved in one during the last Federal election. It all seemed so superficial - the phone calls, the literature, the tracking, the 'Getting Out the Vote', whatever that was. Surely the whole purpose of the exercise was to convince as many voters as possible that our candidate and our party had the best ideas and were therefore the best ones for the job. Right?

I get it now. I get that voters vote for all sorts of reasons, very few of which have anything to do with ideas or policies. I get that only a tiny percentage of people spend more than a couple of hours a year thinking about politics, mostly in the last days before they have to cast their ballot. I get that most people vote from their gut and not their head.

And you know what? That's ok. Because really, are any of us any different? Oh, sure, I read up as much as I can on what the various candidates and parties represent. But in the end, I have to confess - I often vote based on whether or not I 'like' someone. And so do you. It doesn't mean we're wrong, or that we're basing our decisions on incorrect information. It means that the people we are voting for have successfully distilled their message into a form that we can absorb on an intuitive level.

Understanding this brings the political campaign squarely into the realm of marketing - of using words and images to instantly convey a message on multiple levels and to associate your 'product' with ideas and feelings your 'customer' is already positively disposed to.

Want a master class on campaigning? Watch a few seasons of 'Mad Men'.

The genius of Don Draper is his understanding that advertising isn't about convincing people to buy your product. It's about making people feel good about buying your product. Whether it's cigarettes or a brassiere or a new car, Draper and his crew always manage to identify that one thing that people are looking for and then make sure they connect that thing - that feeling - with their product.

Of course, any political or advertising campaign can be constructed to give a false impression, although in most cases the deception is discovered soon after the product is sampled. In most cases, however, the 'impression' conveyed in a campaign is accurate even if specific promises end up in the dust.

Take Rob Ford (please!). Anyone with more than two brain cells to rub together knows that he cannot possibly deliver on anything he has promised, aside from maybe getting councillors to water their own plants. But that's not why all those people voted for him. They voted for him because he justifies their suburban values and, unlike those judgmental 'downtown elites', he actually makes them feel good about their SUVs and strip malls and cul de sacs.

None of this is actually going to lower anyone's property taxes or make anyone's commute any shorter, of course - any more than Stephen Harper has managed to make the federal government any smaller or more transparent. But the impression we have been given of the character of these men is still essentially accurate. Stephen Harper really is the kind of guy who believes that no taxes are good taxes.  Rob Ford really does believe that we all have a God-given right to mow down careless cyclists with our SUVs. And their fundamental appeal is ultimately to those who share those beliefs, even if only on a subconscious level.

The challenge for those of us who are more progressively inclined is to harness these same tools for good and not for evil. And to stop looking down our noses at those who vote with their gut.
Posted by Jennifer Smith at 3:02 PM No comments:

Well. That was fun. 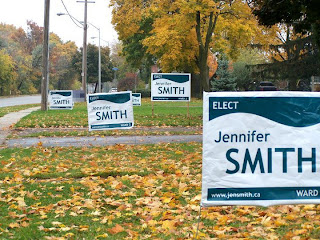 After slogging through nine months of municipal campaigning, it's a little weird waking up now with no doors to knock on, no meetings to attend, no literature to distribute, and no lawn signs to plant. I wish I'd won of course, but we knew it was a hell of a long shot going up against two (two!) incumbents, and some last minute candidates kinda threw a wrench into the works as well.  Given all that, I did very well and have built up a solid base for next time.

I've also learned a lot about running a successful campaign, mostly from my extraordinary campaign manager Esther Shaye. Esther has run campaigns for both the Liberals and the Conservatives, so her help and advise were absolutely invaluable. I wouldn't have had a hope in hell if it weren't for her, and I'm looking forward to bringing some of that experience back to the Halton Liberals.

As I said on my campaign blog, this is only the beginning.  I'm going to keep at it, and in four years I think we will see a very different result.  In the meantime, I will be back blogging about political shenanigans on a more federal level on this blog, just as soon as I pull my head a little farther out of the local issues that have been obsessing me for nearly a year.