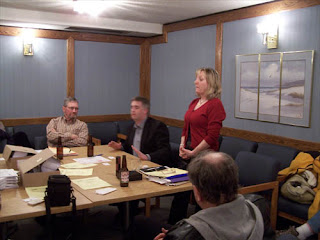 I received the dispatch a week ago from General Shaye, summoning the troops to a secret location somewhere in Oakville to receive our marching orders for the impending Battle to Re-Elect Garth Turner.

Pizza would be served. Outstanding.

I arrive promptly at 18:30 hours, but cannot access the building. I spot a suit and we exchange the secret handshake. "Do you have the pass code?" I ask. He checks his communique, but no indication is given.

On a whim I try pressing '187' (the code for "Party Room") and a voice comes on line. I cover the receiver with my hand and whisper, "Liberal Riding Association?"

So began my first experience as a volunteer with a Federal election campaign. A campaign that isn't a campaign yet, of course. Still, it sure felt like one sitting in that room eating pizza off of napkins, collating poll maps and listening to advice from the more experienced campaigners in the room.

Aside from the snafu at the door, the team seems to be one well-oiled machine. I think it had something to do with the unlikely camaraderie between the ex-Progressive Conservatives who stuck with Garth throughout his banishment and exile, and the long-standing Halton Liberals who welcomed them in from the cold.

The result is a passion for both the candidate and the cause that I doubt exists in any other riding in Canada.

I left the meeting totally stoked, with a box of envelopes to stuff and a renewed confidence in the outcome of the upcoming campaign.

So to those of you who are mired in doubt, who have surrendered to despair, I say to you: back away from your keyboard, get off your ass and JOIN THE FIGHT!