When I attended the Liberal Party Convention in Vancouver earlier this month, the number one question I was asked by MPs, bloggers and fellow delegates alike was, "Is Garth going to run again?"

The answer, apparently, is no.

I knew he'd been back and forth a couple of times on this since he lost the election last fall, but as far as I and the rest of the Halton Riding Association were aware, he was ready and willing to take another shot. So when he started telling the media in recent weeks to "stick a fork in me, I'm done", I thought he was just messing with them. But while nothing is 'official'-official yet, it looks like he's serious this time.

Who can blame him, really? Since he was ejected from the Conservative Party he's had garbage dumped on his lawn, had his vehicle followed and photographed, his wife and his campaign manager have had sexually degrading comments about them spewed across the internet, and he's been inundated with an endless barrage of harassing and threatening emails and phone calls. He's certainly not the first politician ever to be targeted in this way, but as someone who got to take a couple of those calls during the campaign I can personally attest to the devastating emotional effect they can have. Anyone who can stand up and take that sort of abuse for any length of time and continue doing their job the way that they see fit deserves our respect.

So rejoice, oh ye haters - you won't have Garth Turner to kick around anymore (that thud you just heard was the sound of Steve Janke's blog stats crashing to the ground).

Happily, none of this has prevented the man from continuing to speak out about the sad state of our democracy - specifically, the effect of having our elected representatives forced to toe the party line instead of being free to speak on our behalf. His own personal experience with this phenomenon is detailed in his new book, "Sheeple: Caucus Confidential in Stephen Harper's Ottawa". I'd give you a review, but sadly our rapidly expanding town still has but one tiny bookstore (not counting the excellent 'Recycled Reading'), and the two copies they ordered disappeared before they even hit the shelves.

Turner speaks about his book and his experiences in this excellent interview on CBC News: Sunday. There is apparently a later panel discussion with Turner, Elizabeth May, Michael Enright and James Travers which I'm hoping will be posted later.

By the way, before you write off 'Sheeple' as sour grapes or the revenge of the rejected, Turner isn't the only one concerned about the bubble of obedience that Stephen Harper has created around himself, both in caucus and in the PMO:

Mr. Jaffer, whose is married to Minister of State for Status of Women Helena Guergis (Simcoe-Grey, Ont.), said there are "caucus morale" issues in the Conservative caucus and he questioned whether there is enough of a "culture of dissent" within the party for Mr. Harper to be made fully aware of the political situation inside and outside of caucus.

"I often challenged certain things because I wanted to be sure he got the best information; whether he liked it or not was another thing," said Mr. Jaffer. "But that's always a challenge and the Prime Minister has to take a step back and ask himself that; is he being served in the best possibly way from the people who are currently around him? If he thinks that he's not, and, in particular, if he doesn't have that culture, if it's become more of a 'yes' culture than a culture of dissent, then he has to ask that question and maybe he has to make some changes, but only he can really be able to do that." 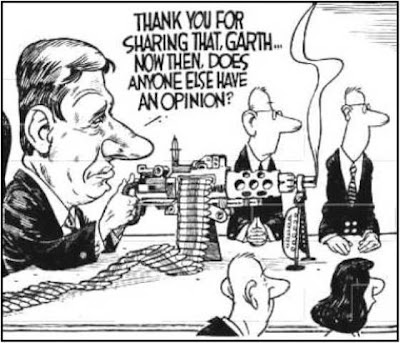 Whatever you think of Garth Turner and his ways, there does seem to be a growing consensus that there are some fundamental problems with our democratic system that must be addressed. Some are attempting to do that through digital democracy, electoral reform, or overhauling their own political parties to make them more internally democratic. Others, like Turner, are questioning the very role that political parties play in our system. They point out, as does Hassan Arif in a recent editorial, that Canada has one of the most rigidly partisan political systems in the world. Even in the U.S., where the relationship between Red and Blue is commonly characterized as a war, votes in Congress rarely fall strictly along party lines, negotiation is the norm, and each representative is fully expected to express the wishes of their constituents and not just their party.

Compare that to our current Parliament, where nearly every vote of any significance is a whipped vote, and any MP who goes against that can expect to be disciplined or expelled. What does that do to the ability or even the willingness of our representatives to actually represent us? What does it say when most MPs spend all of their time (and our money) parroting talking points, re-distributing identical pamphlets and essentially selling their party's position to their constituents? When was the last time you heard an MP speak an opinion that wasn't identical to the opinion of every other MP in his or her party? When was the last time your MP asked you what you thought about anything, or responded to an email with anything other than "Thank you for your comments"?

I used to have an MP. Now I have a spokesperson for the Conservative Party of Canada.

(crossposted from HaltonWatch)
Posted by Jennifer Smith at 3:01 PM