The MP Who Just Wouldn't Leave

Just when you thought the Conservative Party of Canada couldn't get any MORE undemocratic, they come up with the coup de gras.

You may have heard that some folks in Calgary West - Conservative folks, mind you - have been a little unhappy with their incumbent MP, Rob Anders. In fact, they've been trying to get rid of this guy for years, even taking the party to court over it a couple of years ago, all to no avail. 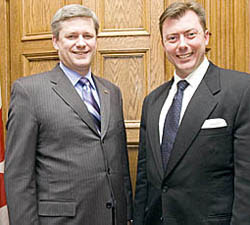 Things seemed to be looking up recently when those trying to oust Anders found themselves a promising candidate (Donna Kennedy-Glans), started themselves a website, and set to work clearing the first obstacle to opening the nomination process: electing a new riding board.

I know, it's shocking, but instead of just bitching and whining and spamming blogs with anonymous "Rob Anders is a poopy-head!!"- type comments, these crazy kids actually organized, drew up a slate of anti-Anders board candidates, signed up a slew of members, and showed up at the AGM 600 strong to democratically elect a board that would be more sympathetic to their cause.

The next step was to mail out ballots to members so they could vote on whether or not to hold a nomination contest, at which point the big guns came out. First, the Conservative Party declared that they would need a 2/3 majority to vote in favour. Then the newly elected riding executive were denied access to the membership lists, thus preventing them from contacting members and letting them know what's going on.

And then it was revealed that any ballots which were not returned WOULD BE COUNTED AS A 'NO' VOTE.

Think about that. Any party member who didn't receive a ballot, or whose ballot was lost on the return trip, or who simply chose to abstain from voting on this issue, had their decision made for them. This is what they call 'reverse onus', and I cannot think of a single precedent in any remotely democratic process.

Of course, none of this is really any of my business as a non-Conservative Party member. But still - if these are the lengths their willing to go to to protect an incompetent but sycophantic MPs, imagine what they might do to protect their Prime Minister from falling to a vote of no confidence in the... oh yeah. Right.

If you hadn't guessed already, Rob Anders is still safe. Along with every other incumbent Conservative MP. Go figure.
Posted by Jennifer Smith at 1:36 AM