I should say from the start, I've always liked Bill Clinton. I liked him more in the beginning, of course, before political pragmatism caused him to compromise or cave on just about every important issue he campaigned on, from health care to gay rights. But I still remember those heady early days when it truly seemed that the nightmare of Reaganomics and endless war and the religious right's stranglehold on American policy might finally be over.

I actually wept during his inaugural address.

Even after his time was up, after all the disasters and the disappointments, after I learned just how badly he had opened up his country and ours to their subsequent pillaging by corporate interests, I still had an unreasoning affection for the guy.

After listening to him speak on Friday, I like him even more.

Garry Wise has an excellent run through of what was said, so I'm not going to go through the whole thing chronologically. Instead, I wanted to focus on the differences between these two men - in their past actions, their present endeavours, and their character.

It was a little sad watching Frank McKenna and the representatives of the various sponsors of the event try to find something nice to say about George W. Bush. At least something that didn't amount to, "He made us and our friends a CRAPLOAD of money!"

There was the usual "no attacks on American soil after 9/11" nonsense (which I'm sure makes the Spanish and the British feel so much better), and they repeated several times the notion that a President is often judged on circumstances and events he has no control over.

But for some reason the one item McKenna and even Bill Clinton chose to focus on was Bush's African AIDS relief program. Which is odd, since many people seem to regard that particular program as at least a partial failure because of its religious and ideological underpinnings. Still, I suppose they didn't have a lot to work with.

In Clinton's case, the "events beyond his control" theme was raised again, only this time the implication was that somehow the booming economy during his two terms was just fortunate happenstance. Perhaps. Clinton himself spoke of the tension in any presidency between what one intends to do and indeed promises to do going in, and the course changes demanded by incoming events.

That's one way of putting it.

Listening to these two men talking about their past, it struck me that the difference lay not so much in their successes or failures, but in their ability to grow and change and learn. You would think that Bush, even though it's only been a few months since his presidency ended, would have at least begun to question some of his decisions and attitudes given how most of the world and his own people have judged him. But no. He's still a True Believer in everything he fed to the American people for eight long, bloody years.

He insists that invading Iraq was the right decision, that it wasn't a distraction from Afghanistan, that anyone who does business in Cuba is supporting tyranny by propping up the Castro brothers, that marriage is between a man and a woman, and that we are in an ideological struggle against 'haters' who recruit the hopeless - which was, apparently, the motivation behind his AIDS program. And I will bet money that if you were to ask Bush the same questions a year or five years or fifteen years from now, he would tell you exactly the same thing.

Clinton, on the other hand, has changed plenty. When questioned on Rwanda, he called it one of the 2 or 3 greatest regrets of his presidency. In fact, he nearly broke down as he talked about the hundreds of thousands of lives he might have saved had he acted differently. He had apologized personally to Romeo Dallaire, and been involved in the memorial to the massacre there. "I have no excuse", he said.

On 'Don't Ask, Don't Tell', he said that there was a veto-proof majority in Congress ready to defend the existing policy banning gays from the military altogether, but that the compromise Powell and other military advisors came up with was originally supposed to be far less restrictive and open to abuse than it turned out to be in practice. He thinks it should be repealed.

Even when asked about the 'Defence of Marriage Act', which he said he signed in order to avoid a call for a constitutional amendment (I remember that - he's right), he also said that his views on gay marriage are "evolving" and that he's more inclined now to believe that marriage is a contract.

As you might imagine, Clinton did more talking than Bush. Because really, how long does it take to say, "I'd change nothing". 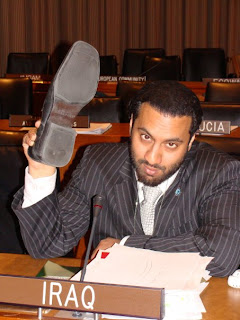 Fellow blogger and attendee Omar Ha-Redeye
expresses what I believe we all felt.

Perhaps the most profound difference was in their post-presidency activities. Clinton has an extensive list, not surprisingly since he's been out of office for eight years. He spoke passionately about his Foundation, about his fight against climate change and malaria and childhood obesity. He talked about his partnership with David Miller and the other mayors of the C40 group of cities committed to reducing GHG emissions. He talked about the importance of doing "public good as private citizens", and how we can literally change lives around the world through organizations like Kiva, which provides micro-loans to entrepreneurs in third world countries.

Although Bush has only been out of office a short time and has been spending it mostly working at the ranch or picking up dog crap, he has plans. He plans to write a book. He plans to build a Policy Centre and Presidential Library at Southern Methodist University in Dallas. And he plans to press his 'Freedom Agenda'. He wasn't clear on how exactly he was planning to do that other than by repeating the word 'freedom' a lot ("Freedom is Peace, Peace is Freedom"), but talking about it seemed to get him all fired up. He lost the good ol' boy routine and slipped into full fire and brimstone mode.

It was a little disturbing, to tell the truth.

This, to me, said it all. One man focused on public service, helping millions of people and the planet itself in real, practical ways and encouraging others to do the same. The other, completely focused on salvaging his own ruined legacy and repeating the same empty rhetoric that got us into this mess in the first place with no apologies and no regrets.

Then of course there was the matter of the passports. It's about the only aspect of the event that managed to make the news, other than the protesters - and yes, it was surprising that neither man seemed to know anything about it. But not many have bothered pointing out that Bill Clinton had already been out of office for several years when George W. Bush (or at least his new Department of Homeland Security) decided to make Canadians use passports to cross the U.S. border. You would think Bush would have been kept up to date on that sort of thing, but maybe not.

At least Bill promised to get to the bottom of it. Meaning, presumably, he'll be talking to his wife.
Posted by Jennifer Smith at 9:40 PM