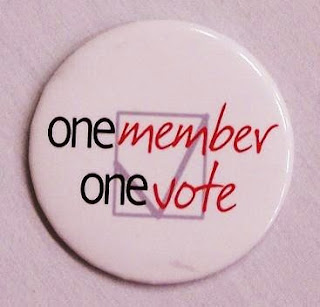 One Member, One Vote has passed. The YLC amendment failed - by a wider margin than I expected, frankly. Braeden Caley spoke eloquently and rationally in favour, as he has on En Famille, and I can certainly appreciate some of his arguments even though I disagree. But in the end, there simply weren't enough of even the YLC delegates supporting their amendment - especially after Justin Trudeau was trotted out to argue against it.

And then Bob Rae made the case for OMOV. 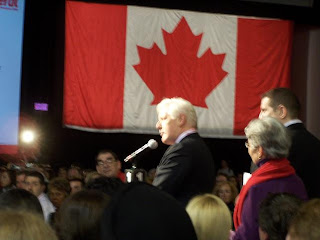 Earlier this morning, I attended the Policy Plenary, which was way more fun than it sounds. As it turned out, all of the priority policies passed, most by wide margins. The only one that was even close was #124 on expanding and enhancing the role of the Canada Human Rights Commission. There was quite a bit of debate, and the resolution was carried by a vote of 223 to 185. Which I'm sure is going to drive the anti-CHRC people bonkers.
Posted by Jennifer Smith at 12:37 PM