What I Did For Earth Day

It was sort of a half-assed, last minute thing, but at some point yesterday I thought, yeah, I'm gonna do it.

I'm going to go the whole day without driving.

You wouldn't think this would be a big deal. After all, I spent the first 24 years of my life without a driver's license. I took public transit. I rode my bike to work. Even when I was seven months pregnant and lived in Richmond Hill, I waddled the four or five blocks to the GO bus stop and managed to make it all the way into downtown Toronto every day.

Then I moved to Milton.

At first it wasn't so bad. The grocery store, the post office, the office supply store and my bank were all within a few blocks of my house. Then the bank moved to the mall. Then the downtown grocery store closed. Then the other grocery store moved from the mall to the Outer Reaches of Developmentville. The D.H. was no longer monopolizing the vehicle, and suddenly I was driving everywhere. I try to avoid it but sadly, I'm just lazy.

Nevertheless, today, despite my utter lack of physical fitness or prowess, I donned my helmet, put my knapsack on my back and set off to bicycle my way through Milton for the day. Just so I could post it on my blog. And to do penance for my new vehicle... but more on that later.

I biked to the post office to deliver a couple of packages. Then to the LCBO for a bottle of utility wine. On the way back I popped by Garth's office to say hi to Esther, but she was in a meeting. Then I stopped by the Shoppers to pick up some milk, and then home again. Round trip: 2.6 km.

After a brief rest I was off to the bank, and then the long, hazardous trek to the new Loblaws Super Centre. Hazardous because the only way out there runs along the four-lane eastern section of Main Street. Unlike Toronto, Milton drivers give zero quarter for cyclists, so unless you are riding on some little residential side street your only hope of survival is to stick to the sidewalks. Which in this case are narrow, barely paved, and run across a particularly brutal set of train tracks.

I made it safely, managed to stuff a week's groceries into my knapsack (I gotta get a basket), and wended my way home. Round trip: 4.8 km.

To top it all off, I even rode my bike to choir practice tonight, then to the pub for our regular Tuesday night pub, then home. Round trip: 1.2 km.

My total ride today was only about 8 km, but they were eight totally emissions-free kilometres. Aside from the carbon-dioxide emissions of my laboured breathing. 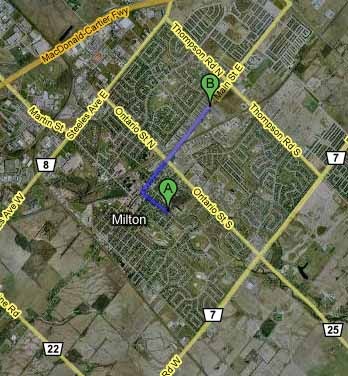 I feel really, really good.
Posted by Jennifer Smith at 9:36 AM