So. Yeah. The new vehicle.

Let me start by saying that despite living in the Sprawl Capital of Canada, my family and I really do have a reasonably small ecological footprint - mostly due to our living within spitting distance of the poverty line most of the year.

We live in a very small house with lots of big trees around it. We do not have central air - only a single window unit. We are self-employed and therefore do not commute. Our son has always walked to school. Only one of us has been on an airplane in the past eight years. We don't own a dishwasher. We do own a washer and dryer, but they haven't worked in years so we do our laundry at the laundromat. And our laundromat uses SOLAR HEATED WATER! Pretty cool, huh?

You might recall my mentioning that our one vehicle is one of these... 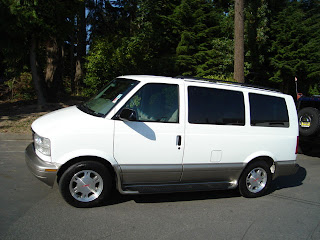 ... which we really do need for transporting crap to and from shows and film sets for our respective businesses. Yeah, it sucks gas like nobody's business and it really would be nice to have a second, much smaller car for daily use, but like I said - we're broke.

Last week my dad gave us an incredibly generous gift. He was getting a new car and offered to give us his old one. We could hardly turn him down, and it really is nice to have a second vehicle even though we can't afford to keep both indefinitely.

It gets better gas mileage than the Safari, although only slightly - about 15% better. It's still big enough for most business-related purposes, plus it's got all sorts of cool features like heated seats, a sunroof, driver's side air bag, computerized everything, and it even remembers who I am when I get in and adjusts the seat and mirrors accordingly.

There's only one problem. It's one of these: 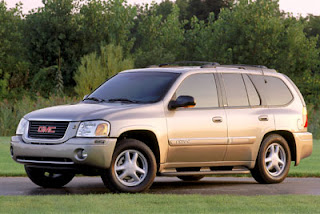 I can't even bring myself to say the 'S'-word, so I've decided to refer to it as the VLC. Short for Very Large Car.