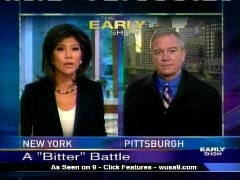 Watching US cable network news these days is like watching a broken engine running wildly out of control, waiting for it to finally thrash itself to death in an explosion of smoking gears and motor oil.

The problem, of course, is the interminable six-week gap between the last Democratic primary and the upcoming one in Pennsylvania. As one wag put it, the gap has created “a ‘news’ vacuum that has essentially forced the national media into a sort of 1950s, pre-technological childhood, playing Sputnik with an old refrigerator carton."

Under any other circumstances, Barack Obama's comments at a private fundraiser would have provided the media with an afternoon's entertainment as Clinton and McCain tried desperately to make hay out of it. Then Obama would have simply pointed out (as he did) that what he said was, in fact, true and representative of what people in Pennsylvania had been telling them. And that would have been the end of it.

Instead, the media and the Clinton and McCain campaigns have spent the entire weekend engaged in a mutually masturbatory frenzy, keeping the story alive and erect through sheer will alone. And now the term 'Bittergate' is being bandied about.

One of saddest spectacles in all this has been watching Hillary Clinton using terms like 'elitist' and pandering to working-class voters by painting Obama as some sort of ivory-tower intellectual snob, "out of touch" with their simple needs and concerns. In other words, exactly like Republicans have been portraying Democrats like her and her husband all these years. 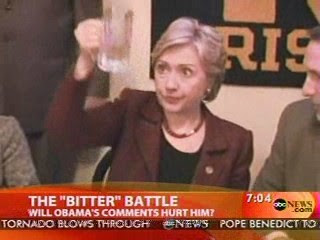 It could be worse, I suppose. At least she hasn't mentioned the orange juice yet.

For a breath of fresh air in the midst of all this, I highly recommend that you read what former Secretary of Labor Robert Reich has to say on his blog. He is deeply critical of both the media and of Clinton, and concludes:

Bitter? You ain’t seen nothing yet. And as much as people like Russert, Carville, Matalin, Schrum, and Murphy want to divert our attention from what’s really happening; as much as HRC and McCain seek to make political hay out of choices of words that can be spun cynically by the mindless spinners of the old politics; as much as demagogues on the right and left continue to try to channel the cumulative frustrations of Americans into a politics of resentment – all these attempts will, I hope, prove futile. Eighty percent of Americans know the nation is on the wrong track. The old politics, and the old media that feeds it, are irrelevant now.

One can only hope.

QUOTE OF THE NIGHT: Complaining that being 'elite' should be a positive attribute in someone who aspires to be President, Jon Stewart asks, "If you don’t actually think you’re better than us, then what the fuck are you doing?"
Posted by Jennifer Smith at 4:24 PM