Garth Turner's been posting even more frequently than usual on the Conservative 'In and Out' scandal (and BTW, Alison's take on this is the best evah!). Seems Garth was actually invited to take part in the whole scheme, but his sharp-as-a-tack campaign manager smelled something fragrant and advised him to say no.

Today, Garth brought back some memories of that fateful campaign as he speculated on the role that money may have played in his victory over former Liberal candidate and current Halton regional chair Gary Carr. One item he commented on was Gary's effective use of signage.

Yep. And I've still got mine. 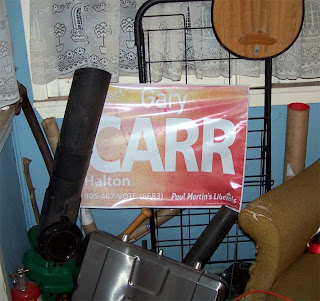 Can these be recycled?
Posted by Jennifer Smith at 9:53 AM

Email ThisBlogThis!Share to TwitterShare to FacebookShare to Pinterest
Topics: Garth Turner, In and Out Scandal, Politics