This was Wendell Potter's Epiphany

Remember Wendell Potter, the former health insurance industry executive and PR guy-turned-whistleblower? He was interviewed by the excellent Bill Moyers recently, and that interview was aired this week as part of a special episode on health care reform.

One of the things Potter talks about is an event he witnessed which rocked him to his core and eventually led him to quit his job and speak out against what these corporations have been doing all these years to prevent any sort of meaningful health care reform from gaining a toehold in the U.S. That event was a weekend-long free health care clinic run by a volunteer group of doctors, nurses, dentists and others called Remote Area Medical (RAM). They normally do this sort of thing in third world countries.

What Potter saw was hundreds of ordinary Americans streaming in from miles around and converging on a County Fairgrounds in rural Virginia in order to wait hours in the rain to see a doctor or a dentist in a tent or an animal stall. For many this now annual event is the only medical care they receive.

The Bill Moyers site has video of this year's 'health fair'. Thankfully no rain this time, but people arriving even the night before found over a thousand people in line before them. The stories they tell are heartbreaking - the images even more so. 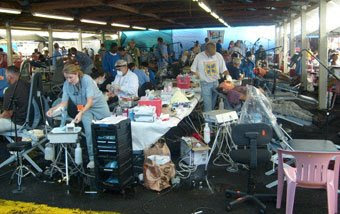 Posted by Jennifer Smith at 2:44 PM