Lisa Raitt spoke at the Oakville Chamber of Commerce this week touting the Conservatives' energy policy. While insisting that fossil fuels are and will continue to be indispensable to Canada's economy for the foreseeable future, she did wax enthusiastic about the government's plans to increase Canada's percentage of non-emitting sources of electricity.

While Raitt said carbon fuels were needed to keep Canada an economic power, she also pointed out that there was a place for renewable energy, which she said is needed to fill the gap created by the desire to cut back on carbon fuel consumption.

To that end, Raitt said, the Government of Canada has committed to having 90 per cent of Canada’s electricity needs met by non-emitting energy sources by 2020.

“Just to contrast what that means, in the UK they have made the promise that they are going to try and get to 30 per cent non-emitting by 2020 and we’re pushing for 90 per cent,” said Raitt.

Wow! That sounds great, doesn't it? Imagine those British slackers setting the bar so low!

Let's think about that for more than a few seconds, shall we?

Canada is one of the largest producers of hydroelectricity in the world. Britain, not so much. So while 90% sounds terribly impressive, it turns out that Canada is already generating 76.4% of its electricity with non-emitting sources. 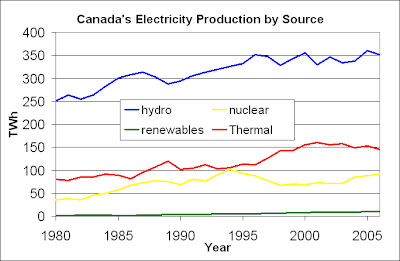 (I know nuclear isn't completely non-emitting, but these are Raitt's definitions. She also includes "clean coal" as non-emitting.)

The U.K. on the other hand only produces about 20% of it's electricity from non-emitting sources (mainly nuclear).