The Liberal Party is pleased to announce that Deborah Gillis has been appointed by Michael Ignatieff as the candidate for Halton in the next Federal election.

I'll give you a moment to get back in your seat. Take your time.

So. Without disclosing anything confidential (I hope... I'm pretty sure), here's what happened:

Garth Turner, as you may know, was our MP and Liberal candidate in the last election. He lost to Lisa Raitt. At our AGM last winter, he declared his desire and intention to be our candidate again, and most people seemed pretty happy about that. At least the ones I spoke to were.

Then some odd reports started coming out in the media and on his blog. Phrases like, "Stick a fork in me, I'm done" were used. And yet whenever he communicated with the board, he insisted that he still wanted to be our candidate. It was a little... confusing.

Meanwhile, a few up-and-comers started to smell blood in the water. Feelers were put out. Alliances began to form. Then in late May, it really looked like Garth was serious about not running. We were given the go-ahead to start the candidate search process and the contenders came out of the closet. There were several of them, some more serious than others. None seemed especially likely to be able to take down Lisa Raitt, although it's hard to say how it all would have worked out.

Overtures were made to Garth to try to get him to come back into the race, but he became more and more adamant that he wasn't willing to do that. And after speaking with him and with Esther, I began to understand why he wanted no part of this particular dog fight.

We like to think of a nomination race as a democratic process, and in some cases it can be. However, given the fact that most ridings only have a few hundred actual party members, the whole process is extremely easy to manipulate. Even when it works the way it's supposed to, the winner is rarely the one with the best ideas who can argue them persuasively to the existing membership. No - the person who wins is the one who can sign up the greatest number of 'insta-members' willing to come and vote for him or her. And if the potential candidate belongs to a church or an ethnic community or some other large organization, it becomes incredibly easy for them to sign up a busload of friends, family and acquaintances as members and get themselves nominated.

It happens all the time in both the Conservative and Liberal parties. I don't know about the NDP, but I wouldn't be surprised if their potential candidates run right out and sign up all the folks in their union local.

There is, of course, a shockingly simple solution to this problem: increase the amount of time someone needs to be a party member before they're allowed to vote in a candidate race. Say, six months. Even four. Even two.

Unfortunately, most political parties have absolutely no interest in doing this because new members mean new money. These 'insta-members' rarely renew their memberships or even stick around to volunteer during campaigns, but no matter. A candidate contest run under these conditions represents a quick infusion of cash to party coffers, so any attempt to change things is likely to be fought tooth and nail by the powers that be.

But I'll get more into that later.

Given these circumstances, and given that Garth doesn't have a lot of friends in the new Ignatieff regime, it was perhaps inevitable that our leader was going to make use of his prerogative to appoint a candidate in Halton. And given the circumstances, I'm not sure I can blame him. Garth wasn't willing to run if he was going to have competition, and the party wasn't about to appoint him or have him acclaimed. And since the Liberals apparently now want Halton back almost as badly as the Conservatives did in the last election, none of the candidates who had stepped forward thus far were seen as sufficiently competitive.

I haven't met Deb yet, but from what I've read she's a serious player. She's kind of from Corporate World, but is better known as an advocate for women in business through a non-profit called Catalyst. She's also worked as a policy advisor in various governments, and was very active in Liberal Party politics in her native Cape Breton (groan... yeah, I know).

All good stuff. I have no doubt that she's going to give Lisa a run for her money, and I will be happy to support her and campaign for her in any future election. Besides, I have a feeling we are about to find out what it's like to have the full weight of the legendary Liberal Party Campaign Machine behind us on this one. Would have been nice to have that in the last election... but whatever.

My problem is not with Deb Gillis. Not at all. My problem is with the way in which this was done. Because while I sympathize with the reasoning behind appointing a candidate, and even appointing somebody other than Garth, and even going out of their way to appoint a woman, there's one thing that I just don't understand:

Could they not find a single worthy female candidate who was actually from Halton?

None had stepped forward, but I can think of two off the top of my head who would have kicked ass, both from Milton's Town Council. I don't know if either of them would have been willing - hell, I don't even know if one of them is a Liberal. But surely enquiries could have been made and Halton Board members could have been asked for their input before they resorted to bringing in a ringer.

Instead, we were simply informed that a decision had been made and this was our candidate. I think they call that 'consultation'.

As you might imagine, a few people are pretty pissed about this, especially those who are closest to Garth. There was much hair pulling and carrying on about 'the end of democracy as we know it' at first, but things have settled down now and it looks like most folks are actually getting excited about working with Deb.

I was kinda pissed at first (although not really surprised), but now I'm mainly curious to see what happens next in this never-boring riding. And since I'm the pragmatic sort, I'm far more interested in figuring out how to solve problems than just complaining about what's already been done.

So. How do we solve this problem? How do we make the candidate selection process more democratic and keep this sort of thing from happening again?

That's your homework, boys and girls. I'm off to the cottage tomorrow and I'm not sure what my internet access will be like, so comment moderation is on. 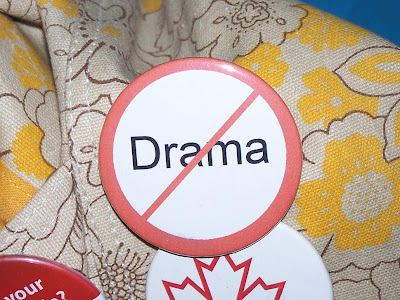