Letter to the Editor re: Lisa Raitt

Here's what I sent to the Oakville Beaver today in response to Friday's article:

When Lisa Raitt spoke to the Oakville Chamber of Commerce last week, she touted the government's goal of generating 90% of our electricity from non-emitting sources by 2020, comparing that to the U.K.'s more modest goal of 30% by the same date. While this makes it sound like the Conservative government is setting lofty environmental goals compared to other countries, these figures are somewhat deceptive.

In fact, Canada already generates 76.4% of its electricity through non-emitting sources due to our abundance of hydroelectric resources. So getting to 90% would only require a 17.8% increase in that proportion. The United Kingdom currently generates only 20% of it's electricity through non-emitting sources (largely nuclear), so they are in fact aiming to increase production from these sources by half.

I would have been far more interested in hearing Ms. Raitt's explanation of why her Ministry has spent the past two years ignoring repeated and ongoing requests from McMaster University for the relatively minimal funding they would need to start producing enough medical isotopes at their existing research reactor to solve the current crisis.

Sadly, Ms. Raitt appears to be more interested in boosterism than problem solving. 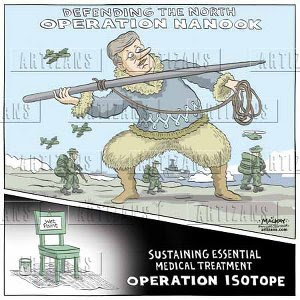 (H/T to Liberal Video Depot for the cartoon)
Posted by Jennifer Smith at 1:11 PM