OTTAWA–A political fundraiser for Natural Resources Minister Lisa Raitt was coordinated out of the office of the president of the Toronto Port Authority, a federal agency Raitt once headed, the Toronto Star has learned.

Critics say it is just further proof the port authority has been supplanted by Tory faithful and has become little more than a partisan arm of the Conservative government, but a port authority official says it was all a simple transgression.

Janet MacDonald, executive assistant to acting port authority president and CEO Alan Paul and who also served Raitt when she held the job, sent out invitations on port authority email inviting people to attend the Sept. 24, $250-a-head fundraiser at a downtown Toronto restaurant.

"Hope you are well. Would you please let me know if you plan on donating/purchasing ticket so I can keep tally and inform organizer of event," MacDonald said in the invitation.

MacDonald refused to talk to the Star.

No kidding. And now the NDP have called on the ethics commissioner to investigate.

Oh, and we may have yet another Lisa Raitt boo-boo to report once we check with Elections Canada. Stay tuned! 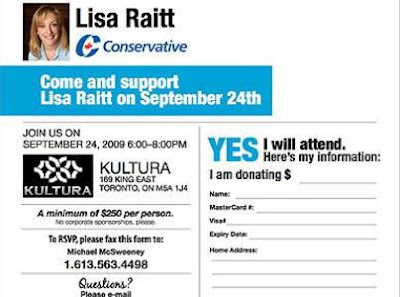 Posted by Jennifer Smith at 3:58 PM