And now back to our regularly scheduled blogging...

My dad recently asked me to explain the "Local TV Matters" / "Stop the TV Tax" ad wars to him. I developed brain lock and suddenly couldn't remember any of the information I'd read over the past few months regarding the CRTC hearings and the complex fight over fee-for-carriage.

Tonight I'm sending him the link to this op-ed in the Montreal Gazette, written by Robb Wells of TPB fame. Impressive. He's managed to summarize the entire ludicrous battle in two or three easily digestible paragraphs, while at the same time drawing our attention to the real elephant in the room:

Ever wonder why we have Canadian cable companies and Canadian broadcasters, if all they air is American programming and still charge us a fortune? Couldn't we just cut out the middle-man and pay NBC directly for their TV shows?

... Being able to tune into Canadian TV drama and comedy is critical to the cultural health of our country. How do we know what it is to be Canadian if we can't see and share our experiences, our own lives, our communities, our heroes, and our history on TV, the most popular and pervasive cultural medium in history?

So what can be done to make sure Canadian TV is actually Canadian?

Revenues from fee-for-carriage must be seen on the screen in the form of new, original local, dramatic and comedic programming - broadcasters can't be handed a bag of money to take on their L.A. shopping sprees.

When I started this blog almost three years ago (!), it was with the intention of discussing matters such as the disappearance of Canadian television dramas and scripted comedies. Shows like Da Vinci, The 11 Hour, ReGenesis, Made in Canada, The Newsroom, Wonderland - I loved them all, and one by one I watched them die after not nearly enough seasons.

Such is the life of a TV fan. But instead of being replaced with other Canadian dramas and scripted comedies, they were all replaced by American police procedurals and Canadian clones of U.S. talent shows.

Today, there's nothing left. Even Corner Gas is gone. CTV still has 'Flashpoint' for at least as long as CBS keeps paying for it, but will probably drop 'The Listener' now that NBC isn't. CBC has nothing new this year except for more reality show knock-offs and the Ron James Show, which is sorta, kinda scripted comedy. Global has 'The Guard'.

And that's it. Literally. Even if you count reality TV (I don't), that's two hours of prime time Canadian content per week on Global and three on CTV. CBC is legally bound to run something like 80% Canadian programming, but even they manage to get away with only 5 1/2 hours of scripted comedy / drama per week - and that's counting The Tudors, which as far as I can tell has no actual Canadian content whatsoever.

All of which brings us back to Robb Wells' opening question: if the Canadian commercial television industry produces nothing, creates nothing, and simply serves to re-package and re-broadcast another nation's stories as expensive backdrops for their clients' advertisements, what exactly are we paying them for? 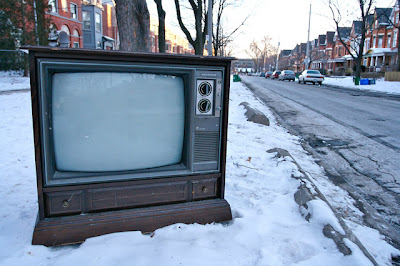