Canada's 'Buy American' Negotiations: The Devil's in the Details

Mayor Rick Bonnette of Halton Hills has become something of a local hero in my neck of the woods, ever since he started his 'mouse that roared' campaign against 'Buy American' provisions shutting Canadian companies out of bidding on U.S. stimulus projects.

It all started with one business owner complaining to Bonnette and the Halton Hills Town Council. Instead of patting him on the head and saying there was nothing they could do, Council took the unlikely step of starting a tiny trade war with the U.S. government by passing their own 'Buy Canadian' resolution on municipal contracts.

A similar resolution was later adopted and passed by the much larger Halton Regional Council, then endorsed by the Federation of Canadian Municipalities, and finally taken up at the federal level where, it seems, they are now dropping the ball.

International Trade critic Scott Brison sheds some light on what is really going on with the government's efforts to gain a Canadian exemption for U.S. 'Buy American' provisions:

According to U.S. ambassador David Jacobson, Canada and the United States are using the World Trade Organization (WTO) rules for government contracts as the basis for these negotiations.

Currently, Canadian provinces and municipalities aren’t covered by such rules. Under the deal, this would change. And in exchange, Canada would get access to U.S. contracts under existing WTO rules.

This seems fair, until you read the fine print.

Buried in the WTO rules are more protectionist policies for the United States, including a separate Buy America clause and additional U.S. safeguards for a large number of U.S. projects and states in important areas such as transportation and construction. On top of this, American municipalities are completely protected under the WTO rules.

In other words, holding the U.S. feds to WTO rules doesn't change a thing because individual states and municipalities - which do most of the 'buying' for these projects - can still discriminate against Canadian suppliers.

I've never been a big fan of free trade agreements in any form, mostly because they are designed to protect business interests without any consideration for what benefits the society or its citizens. But on the rare occasions when such agreements work, they work because both sides are treated fairly, with equal rights and equal protections. Such has rarely been the case in the long history of U.S./Canadian trade deals, and from the looks of it, that isn't going to change any time soon.

I guess Mayor Bonnette is going to have to go back to throwing stones at Goliath. 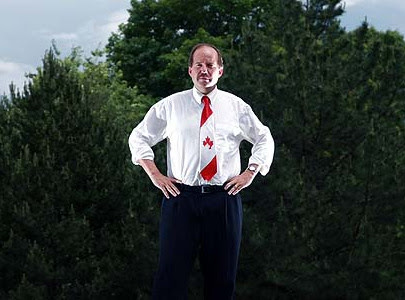 (crossposted from Canada's World)
Posted by Jennifer Smith at 4:22 PM