The Tragic Irony of Prop 8 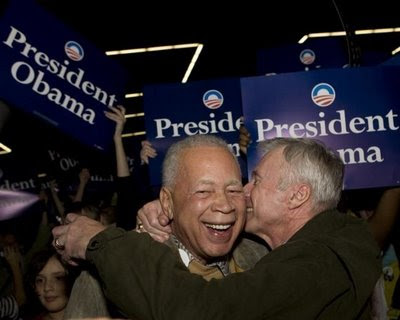 Many people in the U.S. and Canada had their hopes dashed and their elation deflated yesterday with the news that, in all likelihood, California's Proposition 8 banning same-sex marriage had passed.

The blow was made worse not only by the closeness of the vote (a smaller margin than Obama won by), but by the tragic irony that it happened on the same night that America elected a man whose parents would have found their own marriage deemed illegal in many states before 1967.

Worse - it was apparently the black community who voted in favour of Prop 8 in the greatest numbers and are credited with pushing it over the top.

(UPDATE: I would like to amend that last statement in light of the arguments and numbers presented in this excellent DailyKos diary. Yes, African-Americans voted in favour of Prop 8 by a high percentage, but given the relatively low number of black voters in California, that was not nearly enough to account for the final result even with the higher turnout. I apologize for perpetuating this unsubstantiated conclusion.)

This business of state-by-state rulings must stop. The U.S. needs a federal Supreme Court ruling to decide this once and for all, and with a few more progressive appointments to the bench it could happen during this new administration. My hope is that, even though Barack Obama stopped short of publicly supporting same-sex marriage during the election, he will do what Paul Martin did - put aside his personal religious misgivings and support what is right and fair for all.

I cannot think of a more fitting legacy.

"No brutality, no infamy, no degradation in all the years of southern slavery, possessed such villainious character and such atrocious qualities as the provision of the laws of Illinois, Massachusetts, and other states which allow the marriage of the negro, Jack Johnson, to a woman of Caucasian strain. [applause]. Gentleman, I offer this resolution ... that the States of the Union may have an opportunity to ratifty it. ... Intermarriage between whites and blacks is repulsive and averse to every sentiment of pure American spirit. It is abhorrent and repugnant to the very principles of Saxon government. It is subversive of social peace. It is destructive of moral supremacy, and ultimately this slavery of white women to black beasts will bring this nation a conflict as fatal as ever reddened the soil of Virginia or crimsoned the mountain paths of Pennsylvania. ... Let us uproot and exterminate now this debasing, ultra-demoralizing, un-American and inhuman leprosy"

"Even political rights, like the right to vote, and nearly all other rights enumerated in the Constitution, are secondary to the inalienable human rights to 'life, liberty and the pursuit of happiness' proclaimed in the Declaration of Independence; and to this category the right to home and marriage unquestionably belongs."

"Surrounded as I am now by wonderful children and grandchildren, not a day goes by that I don't think of Richard and our love, our right to marry, and how much it meant to me to have that freedom to marry the person precious to me, even if others thought he was the "wrong kind of person" for me to marry. I believe all Americans, no matter their race, no matter their sex, no matter their sexual orientation, should have that same freedom to marry. Government has no business imposing some people's religious beliefs over others. Especially if it denies people's civil rights.

"I am still not a political person, but I am proud that Richard's and my name is on a court case that can help reinforce the love, the commitment, the fairness, and the family that so many people, black or white, young or old, gay or straight seek in life. I support the freedom to marry for all. That's what Loving, and loving, are all about." 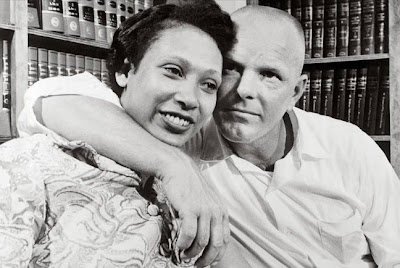 "Slavery could not be compromised in the 19th century because slavery was finally understood as a moral issue. Homosexuality cannot be compromised in the 21st century because it too is a moral issue. To the threats of parts of the Christian Church to leave if homosexual people are welcomed fully without any distinction, the body of Christ must be prepared to say, "That is your choice but we do not compromise truth to comfort you in your prejudice. The Church's doors will be open when your consciousness is finally formed and you decide to return, but we will not reject homosexuals now to avoid offending you. If the essence of our Christ is summed up in words that John's Gospel attributes to him, "I have come that they may have life and have it abundantly," then the choice is clear. Homophobia diminishes life; it does not make it more abundant. It must be ended; it cannot be tolerated even by making it kinder and gentler."

(H/T to Montreal Simon for the photo and the outrage)
Posted by Jennifer Smith at 12:17 PM