No wonder they wanted to shut this guy up

OTTAWA - Parliamentary budget officer Kevin Page told MPs Thursday that Canada will go into deficit not because of global economic conditions, but because of Conservative government decisions to cut the GST and raise government spending.

"The weak fiscal performance to date is largely attributable to previous policy decisions as opposed to weakened economic conditions," Page wrote in his first report to parliamentarians on the government's economic and fiscal position.

Page concluded that Ottawa could run a deficit as high as $13.8 billion next year, in 2009-10. Deficits could remain higher than $11 billion each year through to 2013, adding nearly $50-billion to Canada's debt over the next five years. 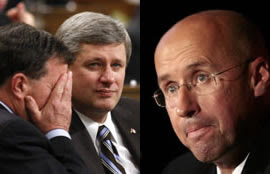 I've said it before - Kevin Page is my hero. But I suspect his job is about to get a whole lot more... interesting.
Posted by Jennifer Smith at 1:36 PM