When I was working at our campaign office on our election day, we heard complaints from a few people that they faced line-ups of half an hour to 45 minutes at their polling station. Most of those people got fed up and went home without casting a ballot.

I think of those people when I read stories coming out of the U.S. about people waiting in line for 3, 4, even six hours or more to vote in advance polls, and I am embarrassed. And humbled. 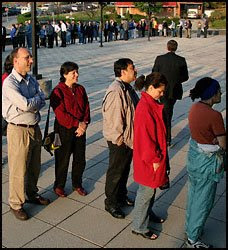 I have said it before: the most remarkable thing about the Obama campaign is not the man himself - it's the people and the movement he has inspired. In a country where voter turnout for the past forty years has averaged just under 53%, they are suddenly faced with the prospect of 60 or even 70 percent or more of eligible voters making their voices heard.

Those millions of dollars Obama has raised and spent don't come from business connections or corporate donors. They represent millions of individual people who have donated 5, 10, or 50 dollars, many of whom had never donated to a political campaign before. That high-tech website he's set up isn't just a political billboard - it is actually used by a significant percentage of voters to inform themselves about his policies, to discuss those policies with one another, to sign up to volunteer as door knockers or retrieve lists of phone numbers to call, and lately to report voter suppression tactics and advise voters of their rights.

All of this represents a level of political engagement that hasn't been seen in America since the 1960s.

And so, for me, the real story of the 2008 U.S. Presidential campaign is not the election of the first African-American President. It is the re-awakening of the American electorate, and the potential rebirth of American democracy.

I am, of course, an optimist, and this all may well prove to be a passing fad. It remains to be seen whether or not this engagement will last beyond tomorrow's election, or beyond the inauguration of President Obama. But just imagine if it did! Imagine if all those millions of informed, aware, empowered voters really kept at it and demanded that their President and other representatives actually follow through on their promises, lest they be removed from power.

And what if these voters were to use their new found voice to demand even more? Like real, universal, publicly funded health care? Or the dismantling of the corporate/lobbyist machine that has run Washington for the past three decades or more? Or the end of America's reliance on all fossil fuels and not just those from unfriendly nations? Or an end to the use of America's military as a tool of conservative political and economic ideology? Or an end to child poverty?


And now, on this election eve, a few words from Al Gore about democracy, from his book "The Assault on Reason":

“When the operations of a government are open to full examination by its citizens and subjected to vigorous discussion and debate, then the corrupt misuse of public power for private gain becomes more difficult to conceal. If the rule of reason is the standard by which every use of official power is evaluated, then even the most complex schemes to violate the public’s trust can be uncovered and policed by a well informed citizenry. Moreover, when ideas rise or fall according to merit, reason tends to drive us toward decisions that reflect the best available wisdom of the group as a whole.

But reason alone is not enough. There must be a public forum accessible to all within which individuals can communicate freely to illuminate unwise as well as illegitimate uses of power. Hannah Arendt, who wrote about totalitarianism in the twentieth century, emphasized the importance of the public realm to this process: "The only remedies against the misuse of public power by private individuals lie in the public realm itself, in the light which exhibits each deed enacted within its boundaries, in the very visibility to which it exposes all those who entered it".

If the forum is not fully open, then those who control access become gatekeepers. If they charge money in return for access, then those with more money have a greater ability to participate. Good ideas in the minds of men and women who cannot afford the price of admission to the public forum are then no longer available for consideration. When their opinions are blocked, the meritocracy of ideas that has always been the beating heart of democratic theory begins to suffer damage. The conversation of democracy then comes untethered from the rule of reason and can be manipulated.

That is exactly was has been happening in America. The replacement of an easily accessible, print-based marketplace of ideas with a restricted-access, television based realm has lead to a radical transformation of the nature and operation for the marketplace of ideas in the United States.

When only those who have wealth can afford to enter the principal forum in which the majority of the people receive their information, then those who can pay the price of admission automatically become more influential. Their opinions become more important then the opinions of others. The nation’s priorities then change".

And a few more from Cousin Teddy:

Posted by Jennifer Smith at 6:48 PM