Random Thoughts on The Layover of the Century*

(*stolen from the inimitable Kady O'Malley, who wins the Best Title of the Day Award)

1) Watching Obama talking with Michaelle Jean, I thought she looked classy and confident (as usual), and he looked absolutely enchanted with her. 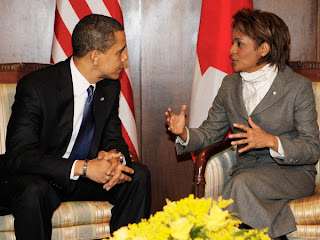 2) There's been much speculation about what Obama and the GG talked about all that time. My guess it was divided between "What is it you do again?" and "So, tell me your version of what happened last fall".

3) Poor, poor Steve. He is no longer The Almighty Tallest.

4) Bafflegab sounds exactly the same in English AND American, no matter who the President is. Sorry, but CCS is still wishful thinking, especially when it comes to an operation like the tar sands. But hey, leave it to Harper to latch on to the one issue that most progressives disagree with Obama on and claiming it as his own.

6) Obama making an unscheduled stop at the Byward Market to buy souvenirs and a Beavertail is just about the coolest thing EVAH!
Posted by Jennifer Smith at 4:28 PM