Meanwhile, It Still Sucks in Gaza

Funny how the western media has totally moved on from Gaza. And yet, for those who are still in the thick of it, the only difference seems to be the particular flavour of hell they're living in.

Yes, the tanks have retreated and the aerial bombardment has ceased. They're still getting shelled from the sea, bombed by drones and shot at from the border, of course. And the Israelis have suddenly decided that their previous arbitrary 300m "buffer zone" was woefully inadequate and have now arbitrarily expanded it to a full kilometre - all on the Gaza side of the border, of course.

This, in a country that is only 6-7 kilometres wide along much of its length.

The expansion of this zone has swallowed up huge amounts of active farmland that desperately needs to be irrigated and/or harvested in order for the Gazan farmers to survive. And so they go out into their fields to harvest. And they are shot at. And three have been killed.

As for the blockade, it is worse than ever. Almost nothing is getting through, with both Israel and Egypt choking off the crossings and the supply tunnels largely destroyed. And at least one UN aid warehouse was reportedly raided and robbed by Hamas, which is SO not helping.

And yet, our faithful correspondent reports one bit of good-ish news this week. Faced with a dire bread crisis caused by frequent or total electrical blackouts, a desperate shortage of cooking fuel, and a near total lack of available combustibles, one man has come up with a creative and ancient solution for his community. 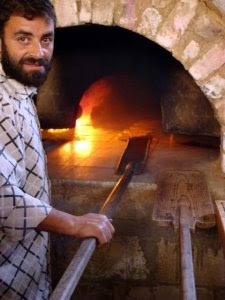 Drawing on the knowledge of a 70 year old craftsman from nearby Khan Younis, Mohammed Abu Dagga had constructed an earthen oven operating on conventional diesel, stores of which had been br rather than the unavailable cooking gas. The mud oven, lined with the few available sturdy bricks, took one week to construct; the technique of mixing and packing a sand, straw and earth mixture meant that Israel’s ban on construction materials did not hamper this one project. Thousands of destroyed houses throughout Gaza remain rubble, reliant on Israel’s benevolence to open borders to concrete and building materials (a benevolence which has yet to materialize), items long-since on the banned list.

On the day we visited, Al Faraheen’s new communal oven had queues past the entrance. These were not the dismal lines of hopeful Gazans waiting for hours to find the last of the bread had been sold. The mood in Faraheen was jovial, an air of relief, if but for one small reason to be thankful. For the many villagers who can’t afford, or can’t find, cooking gas and who are exhausting firewood supplies (although the Israeli military’s bulldozing and tank-ravaging of olive and fruit trees provides a depressing new source of wood), one shekel can bake 10 rounds of bread. Given that Abu Dagga’s investment in the oven was $2,000 (roughly 8,000 shekels), the price is fair, and more within the reach of a largely agriculture-based community than the nearly 400 shekels a canister of cooking gas goes for. 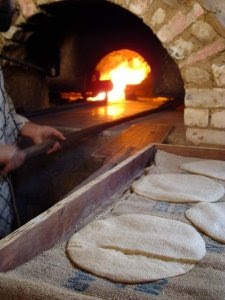 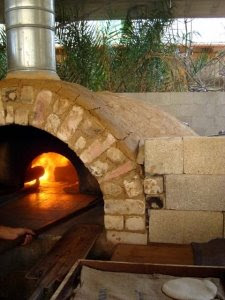 I guess 'good news' is a relative term in a place where a rediscovery of medieval technology can be considered progress, but I suppose it's something.
Posted by Jennifer Smith at 9:30 AM

Email ThisBlogThis!Share to TwitterShare to FacebookShare to Pinterest
Topics: Gaza