"Survival of the Fattest"

Wow. As a long time believer in 'art as visceral communication', I'm impressed. 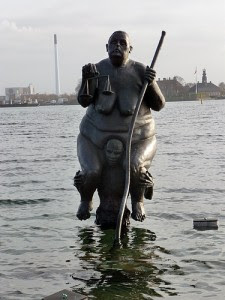 The sculpture ’Survival of the Fattest’ is a symbol of the rich world’s (i.e. the fat woman, Justitia) self-complacent ‘righteousness’. With a pair of scales in her hand she sits on the back of starved African man (i.e. the third world), while pretending to do what is best for him.