I just got back from the "Clean, Green & Prosperous" meeting, which was hosted by our two young Liberal delegates to Copenhagen: Ashley Bigda and Matt Juniper.

It was a fun event, with two guest speakers and about 20 people attending. The presentations were interesting, although a lot of it was pretty familiar to anyone who has seen 'An Inconvenient Truth'. But the unfamiliar material was pretty shocking.

The first speaker was Lee Norton from The Climate Project Canada. Using the now familiar Al Gore PowerPoint format, he showed us some of the updated climate modelling that is both more precise and more ominous because it's taking into account feedback effects like reduced glare from polar ice and methane release from permafrost and now the arctic seabed. On the bright side, sulphur ajavascript:void(0)nd soot released into the atmosphere as plain old air pollution are having a slight cooling effect (great - smog will save us!)

The second speaker was Prof. Jay Malcolm from U. of T. He's an ecologist specializing in biodiversity, and he had some pretty disturbing things to say about exactly what effect even just a two or three degree global temperature increase would have on bioregions here in Ontario. The optimistic scenario would have southern Ontario looking like Georgia. The pessimistic scenario involves our climate changing too fast for plant and animal species to shift north, resulting in mass extinctions and the destruction of nearly all of our forests.

At that point, Matt and Ashley opened things up to the floor. It was a pretty lively discussion, with people talking about everything from local urban planning to green economic incentives to the relative effectiveness of traditional political engagement vs. environmental activism. Lots of smart ideas, lots of interesting perspectives.

It was really a terrific event, and I'm pretty sure everyone in that room will be following Matt and Ashley's Excellent Copenhagen Adventure very closely. 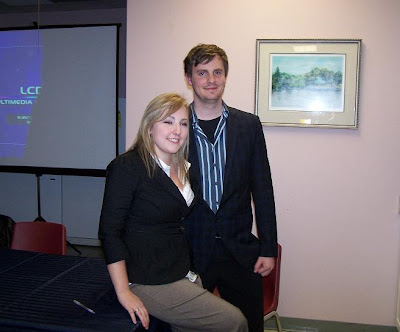 Posted by Jennifer Smith at 2:32 PM