When I say 'Puffy', I'm not just talking about his weight

Watching Senator Mike Duffy's disgraceful performance on CBC yesterday, it's hard to imagine how he managed to keep all that bombast and vitriol in check for all those years as a journalist. It must be such a great relief for him to finally be able to let loose and tell us what he really thinks. 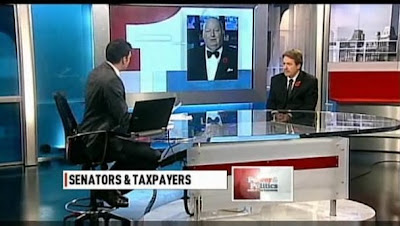 This is, of course, only the latest in a long series of embarrassing episodes since the appointment of His Puffiness to the Upper Chamber. From his crude and belaboured musings on the imaginary bedtime antics of the Premiers of P.E.I. and Newfoundland, to his participation in a fake 'town hall' promoting his Glorious Leader's political policies, Mike Duffy has probably done more to damage and denigrate the institution of the Senate in his few months tenure than years of attacks by those dedicated to its abolition.

And that, of course, is why he was appointed in the first place.

Meanwhile, Liberal MP Glen Pearson tells us about the real Peter Stoeffer, and points out exactly who is the faker here.
Posted by Jennifer Smith at 1:11 PM