Ask And You Shall Receive

Is this new, or had Harper already replaced all these pictures with his own when you were on the other side? And what are the odds of you sneaking in there with a camera tomorrow? Enquiring minds at The Galloping Beaver want to know. As do I.

I honestly didn't expect him to do it. After all, security is pretty tight back there and according to the Ottawa Citizen article, only current Conservative Party Members are usually allowed in.

Still, this is Garth Turner. As another Canadian has famously said, what other kind of shenanigans could he get into?

A few minutes ago I got this:

From: garth@garth.ca
Subject: Re: Harper redecorating the Government lobby?
To: jsmith25@cogeco.ca

And I thought, holy crap, he didn't really do it, did he?

Let me count the ways…

Running beside the House of Commons, on each side of that historic chamber, are two equally historic rooms. We call them the ‘lobbies’ – one, to the right of the Speaker, reserved for government MPs, and the other for members of the opposition. Stone-walled and normally bristling with activity, these rooms are a living part of Canadian history – and for the years I’ve been in Parliament, have been graced with the photos of former prime ministers.

But, no more. At least not the government lobby – a piece of public real estate which has suddenly been turned into a portrait gallery for one man. Our dear leader. Stephen Harper. 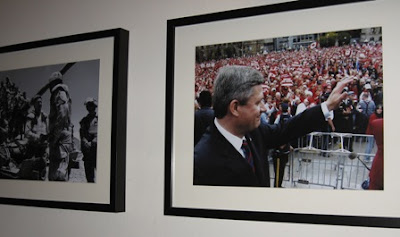 And there's a lot more where that came from, plus a picture of the corresponding Opposition lobby for comparison.

Ok, so I don't really think he went back there and took those pictures just because I dared asked him to. Still, how cool is that?

(UPDATE: And then the pictures came down.)
Posted by Jennifer Smith at 4:27 PM