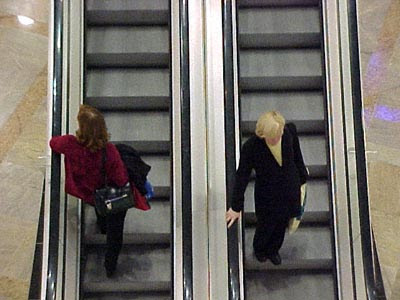 The recent Association of Municipalities of Ontario (AMO) Conference presented a golden opportunity for Provincial candidates to make their pitch to just about every municipal government leader in the province. This hugely influential alliance of mayors, councillors and regional chairs was anxious to hear exactly what the party leaders had to offer Ontario's cities and towns, and they certainly got an earful.

Unfortunately, some candidates weren't telling them what they wanted to hear.

The biggest shock came when PC leader Tim Hudak was asked if his government would continue the 'uploading' of services from municipal and regional jurisdiction to the provincial level. This is a process that was started by the McGuinty Liberals almost as soon as they took office, designed to reverse the 'downloading' of costs for everything from transit to social services to court security onto municipalities by the previous Progressive Conservative government - a government that Mr. Hudak played a significant role in.

Downloading was essentially a shell game designed to make the new Provincial government look like economic wizards, when all it really accomplished was to transfer those costs from the income tax base onto the considerably less flexible property tax base. Municipal budgets have been buckling ever since.

The current Provincial government has been slowly (some say too slowly) reassuming those costs, as well as gradually eliminating the GTA pooling that saw Halton property tax dollars funding services in downtown Toronto. In Halton's case, those savings have been parlayed into much needed infrastructure investments, as well as easing the tax burden on homeowners.

The process is only about two-thirds of the way complete, which is why AMO delegates were shocked to hear that a Tim Hudak government would put the brakes on it until they can see exactly what the province's financial situation is. That has been taken as a nice way of saying that the uploading will stop, and may even be reversed again.

For Halton, and especially for Milton, this is of particular concern since one of the current items being 'uploaded' is court security - a very big deal in this prison town. Now Regional staff are estimating that halting the uploading of that and other remaining services will cost Halton an estimated $15.9 million per year in projected savings.

Reaction from AMO delegates and editorialists alike has been universally negative. One particular mayor was seriously pissed, especially when it was suggested that Hudak's comments were at all ambiguous:

Mississauga Mayor Hazel McCallion said she wasn’t confused at all by Hudak’s position on uploading.

“He was very clear. He is going to stop it,” she said. “He supports it where it is at.”

Social costs must be taken completely off property taxes, she said. “Health is next then education,” she said. “The uploading has to continue in a major way and this is only the beginning. Property taxes were designed to take care of property, not humans.”

Note to candidates: irritating Hazel McCallion is NOT how you get elected in Ontario.

For the record, both the NDP and Green party leaders have firmly committed to honouring and even improving on the current government's uploading commitments. As for Hudak, it remains to be seen whether his handlers' attempts to downplay his remarks will appease voters.

They certainly haven't fooled anyone who was at the AMO Conference.
Posted by Jennifer Smith at 6:34 PM