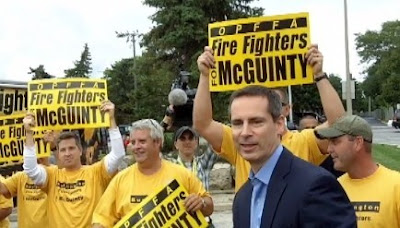 About 300 local Liberals was on hand to greet a special surprise guest at the offices of Burlington candidate Karmel Sakran on Thursday. The group included just about every candidate in the western GTA, as well as the now ubiquitous "Fire Fighters for McGuinty" in their yellow shirts and their big yellow bus.

The group is representing the Ontario Professional Fire Fighters Association, which has grave concerns over Tim Hudak's plan to alter the contract arbitration process for essential service employees who cannot go on strike.

Hudak claims that arbitration ends up costing municipalities too much and that he will insist that arbitrators take the ability of towns and cities to pay into account in their decisions. In fact, considering ability to pay is already part of the legislation, so it's unclear exactly what Hudak plans to do to enforce that and rein in arbitrated wage increases - especially since his former boss Mike Harris tried to do just that back in the 90s and failed to find a solution.

Regardless of whether or not the arbitration system actually needs fixing or not, Hudak's musings have clearly lost him the support of not only the firefighters but just about every other public sector union in Ontario. And having already lost the support of most municipalities because of his refusal to commit to continuing the uploading process, he's left with nothing to show for this politically.

Meanwhile, Dalton McGuinty has the support of the most beloved heroes of the public sector and a lovely yellow backdrop for all his campaign rallies.


(my apologies to Walt Elliot for misspelling his name in the captions)
Posted by Jennifer Smith at 11:25 AM