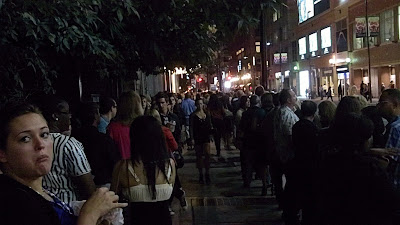 I have a confession to make. I was born and raised in Toronto, lived half my life there, I am a huge movie fan... and yet, up until this year I had never attended a single Toronto International Film Festival screening.

Every year there was some excuse: I had no time, I had no money, I was out of town, I forgot. Mostly I was intimidated by the whole process. So this year I just dove in head first and bought a stack of single tickets to anything that caught my eye. After all, what better way to celebrate losing your job at a video store than to spend your new-found free time and rapidly depleting final paycheck at a film festival?

I was fortunate that in addition to the five movies I bought tickets to, I also got to see even more as a volunteer for the TIFF Film Circuit program. Of course this meant some pretty tight scheduling, especially as I was traveling primarily by GO bus and TTC.

My shining logistical moment was squeezing in three movies at three different theatres in six and a half hours.

It was a wonderful experience. I got to see some incredible movies - some of which I hope to bring to the Milton Film Forum - I got to meet some terrific people, and on top of everything else it gave me a chance to fall in love with Toronto all over again.

What if Shakespeare's plays weren't written by William Shakespeare? It's an intriguing premise, and 'Anonymous' does a reasonably convincing job of advancing this elaborate proposition, as long as you don't look to closely at... well, the history.

The film is largely held together by the performance of Rhys Ifans, who is positively mesmerizing as Edward De Vere, the proposed ghost writer. Here is a character truly worthy of Shakespeare: noble by birth, yet orphaned and raised by the ambitious William Cecil who desperately tries to stifle his young ward's passion for writing and the theatre. But De Vere has his own plans, and crafts himself into a man of wit, wisdom, and surpassing talent. His is one of the most original, fully-realized characters I've seen in a movie of this scale in quite a while.

Ifans shines so brightly as the protagonist that the other characters seem almost dim. An exception was Vanessa Redgrave, riveting as usual as the elder Queen Elizabeth I, and the effect of casting her daughter Joely Richardson as the younger Elizabeth was downright spooky. Rafe Spall also held his own, playing William Shakespeare as an ignorant yet dangerous fool.

Unfortunately, the other principal characters - notably Ben Jonson and Cecil's son Robert - were written more as roles to be filled than as complete individuals, and were therefore less effective.

The twisted plot of Anonymous slowly progresses from intriguing to implausible, and ends in such a muddle that it requires an excess of exposition to untangle. Still, it's an entertaining ride for all its flaws, and fans of costume drama will not be disappointed. Historians will hate it, but just like Shakespeare, the creators of Anonymous are more than happy to sacrifice accuracy in the service of a great story.

In any other country, the name of Edwin Alonzo Boyd would be as well known as Jesse James or John Dillinger. And for a brief time, it was. Perhaps we were only waiting for his story to be told on the big screen for us to fully incorporate it into our national mythology.


I'm not usually a fan of gangster movies, but of course this is a Canadian gangster movie so it doesn't exactly fit the mold. Scott Speedman's Edwin Boyd is so clearly just an ordinary guy who fell on hard times that you can't help but sympathize as he discovers just how easy it is to rob a bank - and then discovers how much fun it is. The same is true with every member of the 'Boyd Gang'. You can see exactly how they got from A to B, and while you can't condone their actions, you understand how they came to commit their crimes.

The film is explicitly Canadian, but in a good way. Americans will still get it, but Canadians will find everything warmly familiar, from the TTC buses to the snow to the layout and decor of the 50s and then 60s houses. Hard to believe, I know, but this is actually a Canadian story told by a Canadian writer and director, shot in Canada with a Canadian cast. It's nice to see, especially when so many other films are being fobbed off as "Canadian" when their only connection to this country consists of a government grant and a half dozen technical crew shipped off to film someone else's story on another continent.

(I wanted to post a trailer for Edwin Boyd, but from what I can tell there isn't one. And this is why Canadian films fail.)
Posted by Jennifer Smith at 2:20 AM

Email ThisBlogThis!Share to TwitterShare to FacebookShare to Pinterest
Topics: Reviews