I still have my reservations about Michael Ignatieff's policies and attitudes and the direction he's leading the party... but DAMN he's good at this!

"That's the choice of the prime minister in my view. We've asked some questions that require an answer. If he wants Parliament to work it's very easy for him to answer positively. But he must understand that I am prepared to vote against him," Ignatieff said.

He stressed that the Liberal party doesn't want a summer election, but said the job of the Official Opposition is to hold the government accountable.

"We want Parliament to work, we want to replace confrontation with co-operation. But we need Prime Minister Harper to deliver the accountability that Canadians expect." 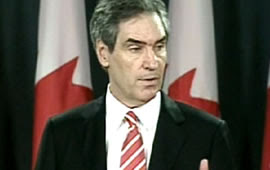 Email ThisBlogThis!Share to TwitterShare to FacebookShare to Pinterest
Topics: Ignatieff