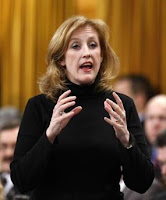 Lisa Raitt might just be destined to join Maxime Bernier on the backbench over this one:

Sensitive government documents left behind at a CTV News bureau reveal Ottawa has poured far more money into the aging Chalk River nuclear reactor than the public has been told.

The binder of documents was left nearly a week ago at CTV's Ottawa bureau by either Minister of Natural Resources Lisa Raitt or one of her aides. Some of the papers are clearly marked "secret."

Oops. Of course, it's unclear at this point which is worse: the fact that 'secret' documents dealing with our nuclear industry were left for a week in a TV studio without anyone noticing, or the actual information contained in those documents:

...In documents headlined "Background for discussion with chair of Atomic Energy Canada," the government lists funding for the Crown corporation at $351 million for 2009-2010. That figure was in the January budget.

However, it also lists $72 million to "maintain the option of isotope production." The public 2009 budget does not specifically mention funding for isotopes.

The documents also include a hand-written note that lists total funding for Atomic Energy of Canada, Ltd. since 2006 at $1.7 billion, and then a talking-point memo to characterize the spending as "cleaning up a Liberal mess."

...Publicly, Ottawa has downplayed Ontario's interest in the sale of AECL's Candu division. But included in the binder is background information for a May 25 meeting with Glenna Carr, who chairs the board of directors for AECL: "The government continues to support AECL's bid in Ontario, but the announcement will probably raise questions about this support. We will have to manage this very carefully."

On the bright side, this little faux pas has probably saved the government at least a year and a half of ducking freedom of information requests.

Meanwhile, according to a recent interview with our man on the nuclear beat David Akin, Lisa Raitt's plan is apparently to give up Canada's leading role in nuclear technology in favour of a "continental" approach. And by "continental", she means...

"We have to look to . . . the United States. For all the medical isotopes that they use — and it's 100 times more than what we use — they don't have a reactor to produce their own medical isotopes. So we are working with them as well because I think it's really important to approach this from a North American continent point of view and not have a situation where we're depending on five aging reactors in the world."

John Ralston Saul is whispering in my ear again: "...fear of owning...". I never thought I'd say it, but thank God for people like Frank Stronach, or this country would just be one big goddamned branch plant.
Posted by Jennifer Smith at 1:04 AM