Learning From the Master

Today's debate appears to be about "should the Liberals should go negative?" in the upcoming election, and if so to what degree. I'm sitting here watching Barack Obama speak in Pennsylvania, and I think I've found the answer.

To me, Obama is striking exactly the right balance between strong criticism of Bush/McCain and presenting specific, positive solutions. He calls out McCain and Palin for lying about him wanting to raise taxes, and points out that his plan would actually reduce taxes for 95% of Americans. He mocks McCain's health care advisor for suggesting that all those 'uninsured' aren't really uninsured because they can just go to the ER - and then explains how he would help employers reduce insurance rates for their employees and allow average Americans to access the same type of plan members of Congress have.

This is the way to do it. Criticize the policy, not the man, then present a clear alternative. Left, right, keep your gloves up, stay on your toes.

Or you could just go with the sweater vest and kittens approach. 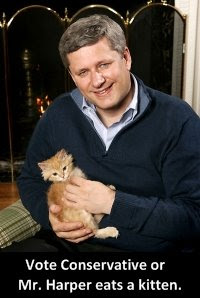 Posted by Jennifer Smith at 1:29 PM