And in other, non-Bernier related news...

Believe it or not, other things are going on in the universe. Like this:

OTTAWA–Fingers are pointing at Conservatives close to Stephen Harper for leaking a diplomatic memo that badly embarrassed Barack Obama and put Canada's vital cross-border interests at risk. Multiple sources say the Canadian note questioning the Democrat frontrunner's public promise to reopen NAFTA was leaked from the Prime Minister's Office to a Republican contact before it made American headline news.

Their claims come days after an internal probe threw up its hands at finding the source. Contradicting Friday's inconclusive report, they claim the controversial memo was slipped to the son of Wisconsin Republican Congressman James Sensenbrenner. Frank Sensenbrenner is well connected to Harper's inner circle and, at Ottawa's insistence, was briefly on contract with Canada's Washington embassy to work on congressional relations.

Contacted yesterday morning, Frank Sensenbrenner did not seem surprised and agreed to an afternoon interview. But he did not call at the agreed time and did not respond to repeated emails.

Coincidentally, I've been reading a book about another conservative administration with major control issues, a hate-on for the media, and a penchant for sabotaging other people's presidential primaries. Hmm...
_________________

UPDATE: The Star has a follow-up today on the PMO link to NAFTA-gate and how Sensenbrenner came to be Harper's inside guy in the Canadian embassy in Washington. This one has the potential to become huge.

"He needs to come before the committee and explain why he limited the scope of the investigation, why it still cost so much money ... why it was so easy for a reporter over the weekend to verify some of the concerns that were raised in the report," Bains said.

UPDATE UPDATE: As further evidence that this story is about to become large, I just got a visit from someone at Foreign Affairs who is apparently spending their afternoon doing a Google search for "nafta-gate sensenbrenner". I'm guessing someone is... concerned.

The last word and prize for the Best Bernier PhotoChop and runner up for Best Bernier Headline of the day goes to... A Creative Revolution for 'Weekend at Bernier's'. 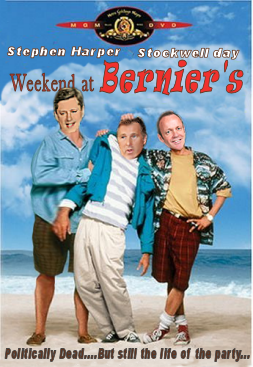 Posted by Jennifer Smith at 8:48 AM