Just when you start thinking that Naomi Klein might be just some wigged out doomsayer, the corporatocracy goes and pulls something like this:

Disneyland goes to war-torn Iraq, with a multi-million dollar entertainment complex, to be built on a 50 acre lot adjacent to the Green Zone. ("Fun park rises from ruins of Baghdad zoo", The Times, London, 24 April 2008)

The American-style amusement park will feature a skateboard park, rides, a concert theatre and a museum.

The occupation forces are of the opinion that Baghdad is "lacking in entertainment". General David Petraeus, is said to be a “big supporter” of bringing Disneyland to Baghdad.

...Supported by the Pentagon, an unknown Los Angeles based holding company C3 of unnamed private equity investors, will be developing the "Baghdad Zoo and Entertainment Experience". The park will be designed by Ride and Show Engineering (RSE)

In other words, they are going to be turning this: 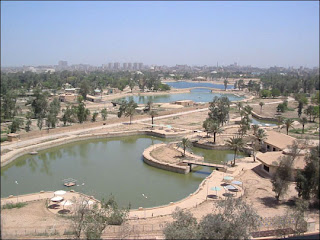 They're trying to make it sound like they're just rehabilitating an area that was destroyed in the invasion, but that isn't quite correct:

The 50-acre (20 hectare) swath of land sits adjacent to the Green Zone and encompasses Baghdad’s existing zoo, which was looted, left without power and abandoned after the American-led invasion in 2003. Only 35 of 700 animals survived – some starved, some were stolen and some were killed by Iraqis fearing food shortages.

In the years that followed, the zoo and the surrounding al-Zawra park became an occasional target for insurgent attacks. But in recent months, families have begun to return cautiously for weekend picnics. Renovations have already begun on the zoo, with cages being repainted and new animals arriving, including ostriches, bears and a lion.

That's not good enough, apparently. So instead of continuing to rehabilitate an existing public space that is part of the fabric of Iraqi society, let's just raze the whole thing, hand it over to an American corporation and start over with a shiny new American-style FOR PROFIT theme park.

Call me crazy, but I'm going to make two predictions here. One: that a significant percentage of the park's patrons are going to be residents of the Green Zone. And two: that the rolling blackouts and brownouts that still plague Baghdad are somehow not going to be a problem there.

Because we wouldn't want our Iraqi friends to get trapped in the 'Carousel of Progress' or anything. 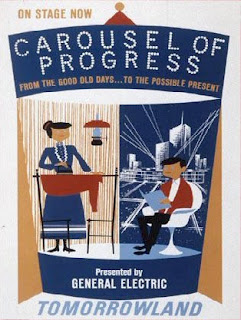