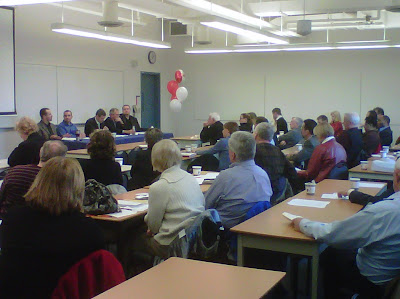 In the few years since I've been engaged in party politics, I don't think I've ever encountered such a stunning clash between hope and cynicism as I have this weekend.

From the beginning, just getting our own local riding to support the idea of doing our own 'satellite' conference was a bit of a struggle. I can understand why. On the surface, this just looked like yet another way to placate the grassroots members with an invitation to provide input that would never make it's way to an election platform. Why should we bother?

Certainly time was a factor. From the day we got the details on how the Party wanted to handle this to the day of the conference we had about a month and a half. Happily, the group that came together to organize our event was small, motivated, and hard-working.

We had no idea how many people would show up. I was preparing myself for just our twenty panelists and moderators, but in the end there were at least 50 people attending through the course of the day. I hardly recognized any of them.

For me, the best gauge of how things were going came during the breaks. Instead of people just drinking their coffee or talking to their friends, the room and the hallway outside got downright noisy with animated conversations. People would seek out specific panelists to talk to or follow up with someone from the audience who had asked an intriguing question. I regretted not having brought business cards because they were flying left and right. I did manage to get cards from John Opsteen (Halton Region Federation of Agriculture) after picking his brains about food policy at the sandwich table, and from Dr. Jeff Zabudsky, the President of Sheridan College, who wanted me to send him links to my blogs.

The feeling in that room was like we had opened a window to let in the fresh air.

I can't even begin to list all the ideas that were presented and discussed. I can tell you that one item of agreement for everyone on our "Real Life Issues for Canadian Families" panel was the absolute need for a national child care policy. Several panelists talked about the $7 a day program in Quebec which, while it's had its problems, has also resulted in lower high school dropout rates, lower crime rates, more women in the workforce - a whole host of indicators that, among other benefits, result in lower costs and higher revenues across the board.

My only disappointment was with the panel that I sat on, which was supposed to discuss the "Creative and Competitive Economy". The topic was admittedly a difficult one to get a handle on, and our moderator had a rather draconian approach to time management, but for some reason I seemed to be the only one interested in talking about Canadian content in the film and television industry, punitive copyright vs. levies on media, arts funding models in the digital age, etc.

I was glad that at least Stephen Baker (owner of the Halton Compass) was there to help me talk about the impact of the internet on print journalism. Everyone else just seemed to want to talk about job training, productivity, and... I can't even remember what else.

I'll be posting what I wanted to say later this week.

After all the excitement and buzz of our own local event, it was a bit of a shock to emerge and read what the national media had to say about it all. I don't know why I expected anything different, but all the naysayers were still saying nay and all the cynics were still poo-pooing the whole thing.

And of course the Conservatives and the media all pounced when it became apparent that most experts (and apparently, most Liberals) still believe that a carbon tax is the most effective and the most fiscally responsible method of reducing carbon emissions. Go figure.

Still, there were some cracks opening in the wall of negativity. For one thing, even the nattering nabobs were forced to admit that the technological wonder of combining webcast, live chat and Skype to interconnect dozens of simultaneous events across the country was really pretty cool, and may in fact presage an evolution in how such events are conducted in the future.

Then, today, some of the other assumptions about Canada 150 started to crumble. For one thing, Robert Fowler shattered the notion that this was all going to be a non-controversial Liberal strokefest.

And then Michael Ignatieff surprised us all.

Liberal Leader Michael Ignatieff concluded a landmark Liberal policy conference Sunday with an ambitious agenda that increases federal spending on the environment and health care, to be paid for by cancelling planned cuts to corporate taxes.

In doing so, Mr. Ignatieff made it clear that the next election, when it comes, will be between two clear alternatives: A Conservative government that emphasizes deficit and tax reduction, and a Liberal government that is willing to defer tax cuts and perhaps extend the deficit to target social programs.

“Do we rush ahead with further reductions to corporate tax[es] we can’t afford?” he asked the 300 participants at a Montreal, “or do we use these resources” to fund new programs.

A tax freeze, he said, would prove that the Liberals had “the courage to choose, to make the choices we have to make.”

Ok, so there's still the possibility that our leadership is going to back down, water it down, say no, of course, he didn't really mean to say that. God knows they've done it before. But right now, today, it appears that Michael Ignatieff has decided to nut up and stand firm for doing the right thing instead of just the electable thing.

Maybe the Liberals will end up standing for something again after all.
Posted by Jennifer Smith at 9:24 AM