Lisa, Then and Now

Two stories mentioning Lisa Raitt hit the news this week - one involving her old job, the other about her new one.

First, the Toronto Port Authority. A long-standing deadlock between feuding factions of the TPA board was recently broken in favour of the anti-airport expansion camp. So what does new federal Transport Minister John Baird do? He announces the addition of two new positions on the board, which of course will be filled by those more... sympathetic to the Conservatives' wishes.

Finally embarrassed by the endless chicanery - and freed from the hotly partisan influence of former chief executive officer Lisa Raitt, now a Tory MP - the Port Authority shocked the teeming world of gutter politics by refusing the offer of unnecessary hacks.

The reasons would be obvious to any director who takes their responsibilities seriously.

The boards of real port authorities governing actual ports in Montreal and Halifax only have seven members. Why should the Port Authority, which has no operational port to manage, have nine? There are no more "user groups" in Toronto left to represent. The new appointees will inspire further opprobrium.

Most of all, there is no money to pay them. The expense accounts of the two new members would likely rival the gross revenue of the Port of Toronto.

This unprecedented little rebellion, which was presaged by months of vicious, albeit inexplicable, infighting on the divided board, explains Mr. Baird's actual motive. He is moving to counter the unexpected effect of the city's first-ever nominee to the TPA, former city planner David Gurin, whose recent arrival tipped a 3-3 deadlock into a 4-3 majority of the sane.

Although a spokesman for the Transport Minister insisted the unwanted newcomers will nonetheless arrive soon, fortune has delivered the fleeting majority an enticing agenda. It can quash Porter Airline's demand for a new ferry to replace the one it just bought. It can replace Ms. Raitt with a qualified professional. Most compellingly, it is preparing to order an audit of its own operation, finally cracking open a black box bulging with inexplicable revenues.To the extent it was inspired in part by a sincere desire to mollify its many enemies, the TPA's sudden turnaround worked like magic. "No expansion" is a potent mantra.

I'm guessing Lisa is glad she didn't get the Transportation ministry after all. Pulling this sort of manoeuvre after her history with the TPA might have been a little... awkward.

Unfortunately, she has her own looming crisis to deal with over at Natural Resources:

OTTAWA - Canada's doctors have been told to rush patients into clinics this weekend if they need tests or treatments requiring the use of medical isotopes, Canwest News Service has learned.

More than half the world's medical isotopes are produced by Atomic Energy of Canada Ltd., at its Chalk River, Ont., facility. That Chalk River reactor, known as the NRU, was shut down for more than a month last November, sparking a global medical crisis and a domestic political crisis.

Production at the NRU has been interrupted again this month - so much so, nuclear medicine specialists have been told to plan for a sharp reduction in isotope availability next week.

...Natural Resources Minister Lisa Raitt did not respond to requests for comment on the matter.

Poor dear - I imagine she's still digging through all those briefing notes. If it's any help, I've got most of the background on Chalk River right here. 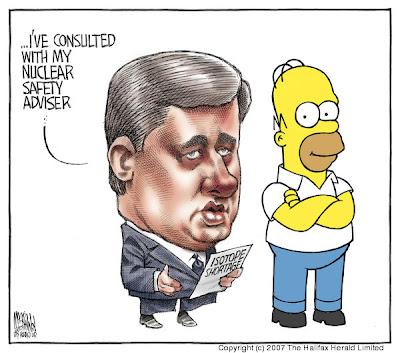 (cross-posted from HaltonWatch)
Posted by Jennifer Smith at 12:52 PM