EbertFest Dispatch #1: On the Road Again


Excuse me while I remove my political blogger hat and replace it with my film critic and movie blogger hat... 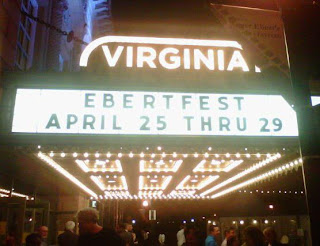 For those who aren't familiar with it, EbertFest, or more properly Roger Ebert's Film Festival, got it's start as the Overlooked Film Festival. It's Roger's way of bringing attention to smaller films, old and new, that he loves and finds worthy. Nothing more. No sales, no deals, more directors and screenwriters than actors - just great movies and people to talk about them.


By the time I rolled into town yesterday after 10 hours of driving, checked into the motel, got a cab to the Virginia Theatre, grabbed some popcorn in lieu of dinner, found a seat, and watched my first two movies ('Joe Versus the Volcano' and 'Phunny Business'), I was too exhausted to write anything more than a couple of tweets.


If only I'd had more American coin to fill the meter at the Illini Hall this morning, I could have stayed longer at the Far-Flung Correspondents' panel. As it was, I missed the first 5 minutes and had to leave about 45 minutes in.


The Far Flung Correspondents are Roger Ebert's network of movie critics and bloggers from around the world. I was thrilled to see that there were not one but two representatives from Canada - one from Montreal and one from Toronto. I wonder if they drove. 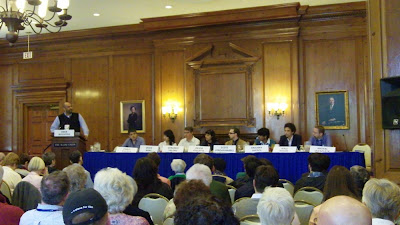 Olivia Collette from Montreal spoke glowingly of her province's vibrant film scene, where unbeknownst to the rest of the country they somehow manage to produce many hundreds of films every year which people there actually go to see. Unfortunately since there is clearly NO film making going on in English Canada, our Toronto rep Grace Wang was relegated to reporting on the burgeoning film scene in China which she had visited recently.
My faithful readers know how I feel about this sort of thing, but I shall reiterate.


English Canada seems to have some sort of perverse self-loathing when it comes to our own cinema - or television for that matter. As a former video store clerk and current Film Forum volunteer, I've seen this phenomenon first hand. Quirky little European or South American (or Quebecois) films of any decent quality are universally lauded by those who love film, and who pride themselves at having found this gem of a film that you simply must see.
And yet, an equally good English Canadian film, unless it's directed by David Cronenberg or Atom Egoyan or has a big name American cast (cough... Barney's Version...), is inevitably greeted by these same 'film lovers' with all the enthusiasm of a ten year old facing a plate of steamed Brussels sprouts.
I'm looking at you, 'The Trotsky'. And you, 'Edwin Boyd'.


I wish I could have stuck around for the Q&A to talk about some of this. I also wish I could have told them about the TIFF Film Circuit, although I've been doing my best to spread the word all day to anyone who will listen.
The biggest complaint from film lovers from nearly every country represented on the panel - from England to Egypt to Brazil - was the lack of access to anything other than big American blockbusters, especially in smaller centres. The Film Circuit model, which distributes film festival films to small towns and cities through groups of volunteers booking local venues with TIFF handling the messy distribution and rights stuff, is one that could - and should - be emulated around the world. Even in America. Perhaps especially in America.

After all, not every town is lucky enough to have its own Roger Ebert.
Posted by Jennifer Smith at 2:14 AM