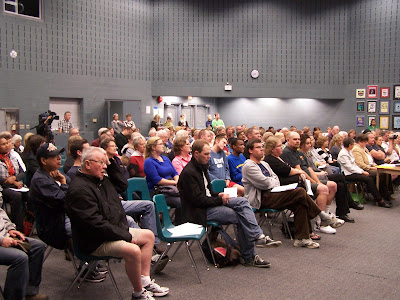 Four of Halton's provincial candidates came together at Milton District High School last Thursday to debate the issues and make another pitch for your vote.

Unlike some previous debates, this one had a sizable crowd attending, possibly because this would be the last candidates meeting with no admittance fee and the last one held in town. Or perhaps people just wanted to see if Progressive Conservative candidate Ted Chudleigh would appear.


Mr. Chudleigh, after saying that he would not be able to attend at all, later announced that he would be arriving around 8:00. In the end, he walked in the door at 8:13, which happened to be during the midway break. His elections signs preceded him, however, with dozens of them arranged chock-a-block, lining both sides of the road leading up to the school.

The event was organized by the Canadian Federation of University Women (CFUW) and moderated by Milton District Principal Ian Jones, who got plenty of practice last year when he played the same role at the Heritage debate during the municipal election. In fact, the exact same format was used: candidates gave their opening remarks, then answered questions set by the organizers, and then were given questions submitted by the audience.

The first question which all four had the opportunity to answer came from a student who was returning to Halton after graduating from university. They wanted to know what each candidate's party would do to create jobs in Halton suitable for those with a university education that did not involve retail or general labour. An excellent question given that, in Milton in particular, a common complaint is that those who work here can't afford to live here, and those who live here can't afford to work here.

Tony Rodrigues of the Family Coalition Party answered first, lambasting the Liberals' green energy investments and claiming that wind and solar power have been a dismal failure in Europe. He suggested that lower taxes and reduced red tape were the solution to creating jobs.

Indira Naidoo-Harris of the Liberals responded with her party's record of adding 200,000 new post-secondary spots and more jobs than the rest of the country combined, as well as the 50,000 clean energy sector jobs they are working on bringing to the province. She emphasized that the Liberals are looking to create jobs, not just for the next few years but "for generations to come".

Nik Spohr got a laugh when he quipped that his post-secondary job choice was "NDP Candidate", and made it clear that he understood the questioner's difficulties from first hand experience. He insisted that the best approach to job creation is to create an educated workforce that isn't crippled with debt, and outlined his party's plan to freeze tuition rates and take the interest off OSAP.

Ted Chudleigh of the Progressive Conservatives had a different approach, promising that his party would allow small to medium-sized businesses "do what they do best" by removing red tape, reducing business taxes, and allowing them to bid on government contracts along side large businesses.

He also made a curious comment regarding job creation in Milton. He claimed that the town was actually doing very well in that regard, with the 3M distribution headquarters opening last year and the national Target store warehouse coming soon, creating a total of 1,300 new jobs. "And those are good jobs!" he said.

A quick check of local warehouse job listings reveals that they pay on average $12.00 - $14.50 an hour and require an ability to "lift heavy items repeatedly". Good jobs, no doubt, but probably not what a university graduate is looking for.

One question came from a grade 7 student wanting to know why there were 'split' classes with students from different grades. She complained that she found the grade 8 students in her class "distracting".

Interestingly, the increase in the number of split classes is a symptom of smaller class sizes. Different grades are given a hard 'cap', so if they end up with, say, ten extra students from one grade they are put in a class with the overflow from another. None of the candidates could come up with a better solution or even felt that it was much of a problem, although Mr. Spohr used the opportunity to talk about inequities in funding between school boards, and Mr. Rodrigues suggested doing away with trustees and school boards altogether to save money. Apparently he is unaware of how little a school trustee is paid.

The candidates were then asked how they would pay for their parties platform promises without increasing the deficit or the debt. Mr. Spohr mentioned several places where the NDP planned to find more money, including increasing corporate tax rates while making tax breaks contingent on job creation, capping the salaries of crown corporation CEOs at $300,000, and eliminating the Local Health Integration Networks (LHINs).

Mr. Chudleigh repeated his party's claim that government revenues have increased 80% over the last 8 years, while the economy has only grown 10%. He didn't cite his sources on this or realy clarify what he was saying, but a little digging reveals that in fact, the percentage of tax revenue to GDP has remained at a consistent 10% throughout both the Liberal and Progressive Conservative regimes of the past 16 years. He also claimed that the Liberals had doubled the debt from $120 billion to $240 billion.

Ms. Naidoo-Harris countered that the net debt to GDP has actually only increased by 25%, and pointed out that the Liberals had managed to bring the government out of the $5.5 billion dollar deficit they inherited from the PCs into a surplus situation by the end of their first term before the recent recession hit.

Mr. Rodrigues continued to provide his own unique perspective on many issues. He started by claiming that all the kids who ride his bus who were once in day care were rude, while those who were cared for exclusively at home were polite. He also suggested that if a sixteen year-old is old enough to have a "killing machine" placed in their control (i.e. a car), they should be old enough to vote. And a bit later, he asked, "What's the difference between pioneers and immigrants?", then, answering his own question, "The pioneers built this country, and the immigrants, they just took advantage of it. I am one of them too!"

OPPORTUNITIES FOR THE DEAF

There was a sizable contingent from Milton's large deaf community present at the debate, and the entire proceeding was interpreted by a volunteer sign interpreter. One of the more interesting questions came from this group, asking what the various parties had to offer Milton's large deaf community in terms of employment and opportunity. Mr. Spohr lead off by talking about increasing accessibility for all persons with disabilities, and increasing ODSP (Ontario Disability Support Program) payments and reducing clawbacks. He also had the good grace to admit that he didn't know everything about the issue as it pertains to the deaf community and asked them to come to him with suggestions.

Mr. Chudleigh also promised to reduce the clawbacks on ODSP, and Rodrigues and Naidoo-Harris found something they could agree on: the desirability of teaching sign in schools and their personal regret that they never learned sign themselves.

When a question about growth and its effect on agriculture was raised, Mr. Chudleigh got his dates a little mixed up when he claimed that the extremely rapid growth in Milton was "caused by" the Province's 'Places to Grow' legislation. In fact, Milton started growing rapidly as soon as the 'Big Pipe' was put in in in 2001, whereas 'Places to Grow' wasn't brought in until 2005.

He also spoke about the Milton Hospital expansion which he said was "eight years too late", pointing out that it had been in the beginning stages back in 2003 when the incoming Liberals put it on hold, and would have been finished by now had they not done so.

Mr. Spohr hit closer to the issue of agriculture when he spoke about a young man he met recently who was lamenting the demise of the Halton Young Farmers Club, which is apparently down to its last four or five members. He also spoke about 'Ontario First' government procurement, more Ontario wines at the LCBO, and encouraging farm processing on site.

The last question had to do with recreation, and Ms. Naidoo-Harris used the opportunity to talk about the Government of Ontario uploading costs from municipalities - something I have discussed on this blog - to free up property tax money for things like recreation. Nik Spohr went further, raising the spectre of Toronto's threatened service cuts and suggesting that recreational facilities are public and should therefore be free.

Mr. Chudleigh concluded by saying that "there is only one taxpayer", and that "uploading or downloading shouldn't be a political decision", it should be an economic one based on "which level of government can provide the best service at the best price".

Of course there's a bit more to it than that, as Mississauga Mayor Hazel McCallion and many other municipal leaders have repeatedly explained. I suspect even Ted's friend Gord Krantz would have a thing or two to tell him about the inflexibility of municipal finances, and what he thinks about Mr. Hudak's reluctance to continue the uploading process.

As we head into the home stretch of this election, I would like to say one more thing:

Just vote. And I'll see you on the other side.
Posted by Jennifer Smith at 11:26 AM