Fun Facts About the Census

I must confess, one of the reasons why I am so engrossed in the issue of the long-form census is that I am a genealogist. And not just as a hobby - I've actually gotten paid to do research for others and even compiled a 1,300 page, 5 volume genealogy of the Truax family.

In other words, I know my census records.

So when people react with shock and dismay over the personal, intrusive questions in the census long form and moan over how this is the evil work of our modern bloated bureaucracy run amok, I have a hard time buying it. After all, these types of questions are hardly new.

~ The earliest census records include only the name of the head of the household - the remaining family members are listed only by gender and age range. Starting in 1841 in Great Britain, 1850 in the U.S. and 1851 in Canada, names of all family members were recorded - although not the names of slaves in the U.S.

~ The Canadian Census has always asked for 'religion' (this, along with 'origin', is a very useful marker for genealogists tracing a single family - especially one named 'Smith'). The U.S. Census has never asked for religion. Neither had the UK census until 2001.

~ As early as 1850, the U.S. census asked for things like 'value of real estate', literacy, and 'Whether deaf and dumb, blind, insane, idiotic, pauper or convict'.

~ The U.S. and Canadian census records list people where they normally reside, whereas the U.K. census lists people wherever they spent the night before. They always have.

- By 1901, the census for Canada included 36 columns of detailed questions about education level, employment and language. The 1900 U.S. census had 28 columns and asked for things like birth place of mother and father, number of children and number of children still living, and whether the property was rented, owned free or mortgaged. 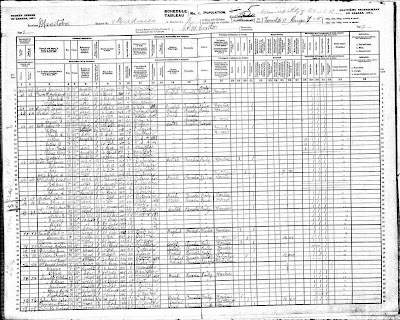 ~ Almost all census years have included a farm schedule / agricultural census that asks for details on acreage, crops, livestock, etc. Apparently Tony Clement still believes that this information is so important that it will continue to be a mandatory part of the census.

~ As of this year, the U.S. has replaced their long form census with a rolling "Community Survey" that goes out continually to 250,000 household per month. It is still mandatory, and asks for more information at a greater frequency of polling than the long form.

Just thought you should know. 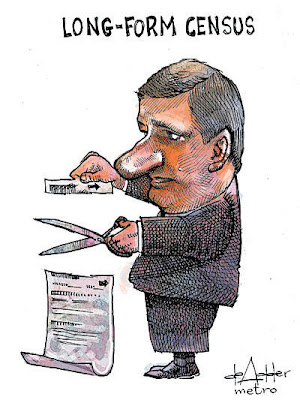 Posted by Jennifer Smith at 6:31 PM