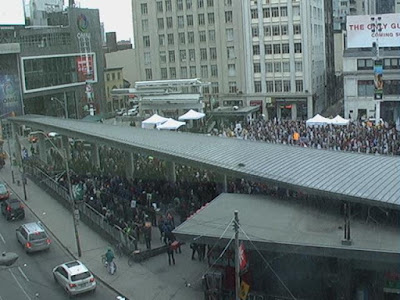 Some are saying 10,000. The police estimated 7,000. I heard one Conservative pundit swear that there were only 47 protesters, three lost tourists and a hot dog vendor, but I'm pretty sure he was actually in the lineup for 'Fiddler on the Roof' tickets.

Outliers aside, it was a HUGE rally.

I took the GO bus in from Milton with my friend and fellow municipal candidate Carey DePass, and we met up with Deb Gillis once we arrived in Toronto. We had hoped to meet up with a few other Halton friends at Dundas Square, but one look at the crowd and we knew we'd never find them.

And yet, within 15 minutes I managed to find fellow bloggers Jeff, Mark and JimBobby standing right behind me. It's those blogger pheremones - we're just naturally drawn to each other.

The most striking thing about this rally was that it wasn't your usual crowd. Most other protests these days seem to be largely populated by special interest groups out promoting their own agenda. But here, almost every single sign and banner was directed straight at Stephen Harper and prorogation. I saw a few banners for one union off in the corner, and a solitary Truther stood vigil beside the march route. But by and large these people were exactly what they appeared to be: ordinary Canadians, young and old, urbanites and 905ers, all compelled to speak out against a threat to their democracy.

One thing I did find annoying was the NDP signs. This was supposed to be a non-partisan event, and yet there were several people handing out bright orange signs with anti-Harper slogans and a very visible NDP logo on the bottom.

I overheard several compaints about this, and a few people even folded up or covered the bottoms of their signs to hide the logo. And I'm happy to report, there was not a single Liberal Party name or logo to be seen anywhere - except on the Deb Gillis button on my purse.

I'll have video for you later tonight.
Posted by Jennifer Smith at 10:58 PM