Ok, my week of mourning is over. Time to move on.

Every Liberal in the country has spent the past week busily hatching schemes and drawing up blueprints for "How to Save the Liberal Party From Oblivion". Suggestions have included moving right, moving left, electoral reform, re-jigging pre-writ spending laws, finding a 'saviour', recruiting Elizabeth May, and cloning Pierre Elliot Trudeau.

All of these plans are sincerely and carefully contrived to help the Liberals win more seats next time and eventually win back the House, but none of them address a more fundamental question that, believe it or not, Stephen Taylor managed to bring into sharp relief:

What do the Liberals stand for?

The bulk of his thesis is bullshit, of course, although he did manage to choke out some back-handed and belated praise for Dion. But that one point stands out as the sort of profound truth that one occasionally hears from the mouths of four year-olds.

I sometimes despair that I am hopelessly naive to believe that things like policy and vision even matter anymore in our world of sound bites, media manipulation and celebrity politics. But when I take a close look at what is going on south of the border right now, I think that I might just be right after all.

The Obama phenomena has too often been written off to charisma and skilled oratory. But after seeing the crowds that have been turning out to vote in the advance polls and the predictions of over 70% voter turnout in a country that hasn't cracked 60% since... well, the sixties, I am more convinced than ever that there is more than star power driving this.

Americans are excited, and they are excited because they believe that their vote will make a real difference and bring them things like universal health care and an end to job outsourcing and serious action on the environment and an escape from the war in Iraq. They are excited because Obama is telling them that these things are possible and achievable instead of explaining why it can't be done and why they never really wanted that stuff in the first place.

We need to get Canadians excited. Just so.

I frequently hold up the Trudeau years as my idea of the Golden Age of Canadian Liberalism, but I was reminded yesterday that the real transformation of the Liberal Party from a private members club of stodgy, Amero-centric corporate yes-men to the briefly shining light of social democracy in North America happened under the watch of Lester B. Pearson.

Both The Star and The Globe & Mail ran editorials yesterday invoking the Kingston Conference of 1960 as a model for the potential rejuvenation of the Liberals. Peter C. Newman was there:

Especially now, with no election in sight and time to plan, the Liberals ought to pull a Ben Tre manoeuvre - the Vietnamese village that, in 1968 "had be destroyed in order to save it." When the Liberals were in a similar jam in 1960, facing the formidable political hypnotism of John Diefenbaker, Lester Pearson organized a four-day meeting at Kingston, Ont., that brought activists and academics together in a rare free-form gathering. Three years later, that radical process - and enlightening contents of its presentations - breach-birthed a victorious Liberal Party, based on new paradigms, new energies and new recruits who would become the party's intellectual and animating agents provocateurs for the next three decades.

...The Pearson-sponsored Study Conference on National Problems, which convened at Queen's University in September of 1960, was billed as a non-partisan assembly of liberal-minded Canadians. Less than half of the 196 attendees were party members, though 48 of them were later named to senior appointments in Liberal administrations. The most influential was Tom Kent, an ex-Economist columnist who became editor-in-chief of the Winnipeg Free Press and later Mr. Pearson's chief policy adviser. His paper Towards a Philosophy of Social Security became the winning blueprint for the Pearson platforms in the three elections that followed. The distinguished Quebec academic Maurice Lamontagne's lecture was summed up in his opening sentence: "The ultimate objective of economic activity is the maximum common welfare."

Watching the proceedings, sensing the electricity in the air and assessing the presence of such newcomers to the political wars as Jean Marchand, Maurice Sauvé and Mitchell Sharp, I soon became aware of what was really happening. A new political generation was being born - the same style of transformation that the Liberal Party desperately requires now - as Jean Chrétien might put it, "the better the sooner." 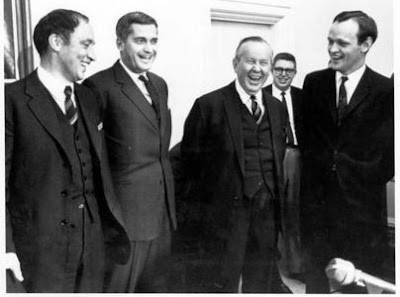 Voter turnout during that period, in three rapid-fire elections in 1958, '62 and '63, was the highest in Canadian history at close to 80%. No 'election fatigue' there.

We are not likely to see another star like Obama or Trudeau rise from the ranks at the upcoming convention, but nor do we really need one. We just need to re-discover what we stand for, and find a way to enthusiastically communicate that vision with one voice. We should be developing bold new progressive policies that move the party out of its comfort zone and get people excited about the possibility for real, positive change in this country. The Green Shift was a policy like that, but it was presented in isolation by a hobbled leader without the support of his own caucus. Perhaps it can be rehabilitated, but that can only happen if the fat bastards of the party agree to either get lost or get the hell out of the way.

This, to me, is the best argument against Frank McKenna or John Manley taking the helm this spring. Many have argued that such Chretien/Martin era stalwarts will appeal to the Blue Grits and Red Tories and bring them back into the fold, but this approach ignores the glaring truth that we are bleeding far more profusely to the left than to the right.

More on that later.

Getting people excited about the party and the political process in general solves a plethora of problems for the Liberals. It will increase voter turnout, which will not only help financially but will likely favour the Liberals as they were the ones who disproportionately stayed home this time. It will get younger people interested and involved, not only as voters but as people with the means and know-how to upgrade the party's antiquated web presence, fundraising mechanisms, voter databases, etc. It will draw in volunteers and organizers and the kinds of human resources we were sorely lacking this time around.

Most importantly, it will generate the grassroots individual donations which are absolutely essential under the new donation rules. This is the real secret behind Obama's success - not the crowds at his speeches, but the millions of donors who have stuffed his campaign coffers to the point where he can afford to buy a solid half hour of prime time television without blinking.

The Liberal Party has survived and succeeded over the long years because it has always been willing to change and adapt, and even burn itself to the ground once in a while in order to build anew. If they refuse to radically transform themselves again this time and insist instead on cowering behind the policies and personalities of the past, maybe they really are destined to be replaced by the NDP as a dominant force in Canadian politics.

I guess we'll find out this spring.
Posted by Jennifer Smith at 12:25 PM