I still hadn't made up my mind who to vote for in tomorrow's election. As I explained earlier, I've been going back and forth between the Green candidate and the Liberal guy.

I found this in my front door today: 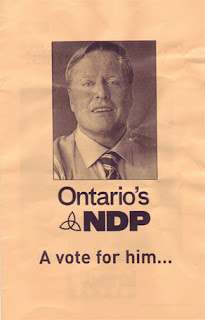 At first I thought the NDP candidate had dropped by, until I opened it and saw this: 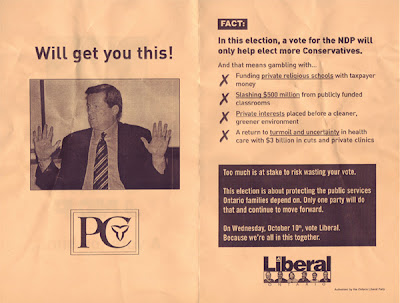 I actually phoned Gary Zemlak's office to find out if this was for real. Oh yes, they assured me. We just wanted to make sure everyone trying to decide between Liberal and NDP was aware of the potential consequences.

"I see", I said. "So what you're doing is telling people not to vote NDP, not because of their policies, but because it might split the vote and the Liberals might not get in?"

The guy I talked to seemed genuinely baffled by my indignation. He kept saying that he was sorry if I was offended or confused, but parties do this kind of thing all the time during elections.

Sorry, but I don't remember ever seeing anything this blatant.

To top it all off, Gary Zemlak doesn't even like MMP, so as far as I can tell his ideal government would only ever have two parties: his, and the losers.

In any case, these guys have done me a big favour.

I've finally decided who to vote for.

Posted by Jennifer Smith at 6:04 PM