Garth Gets a New Chew Toy 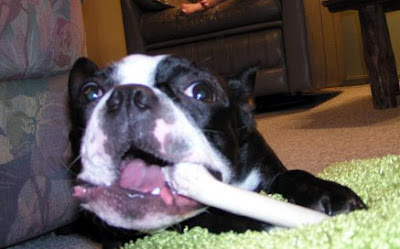 After months of being poked, prodded and cajoled on the issue by myself, 'Charles', 'Bill-Muskoka' and a few other regulars on his blog, Halton MP Garth Turner has finally started to look seriously into the implications of SPP and Deep Integration.

He is starting cautiously, refusing to take a firm stand one way or the other until he can gather more credible information. And who can blame him? After all, the administrations and 'stakeholders' involved have been exceedingly careful to put the most non-threatening face they can on their little project. It's only when news items surface about relaxing standards on pesticide residue on food, or the adoption of a Canadian no-fly list that isn't likely to work any better than its American counterpart, that the real agenda behind the 'Security and Prosperity Partnership' is made apparent.

It also doesn't help that the whole thing now has every right-wing 'World Government' conspiracy nut on the web positively foaming at the mouth (please, guys, don't take our side, ok?).

I'm not sure if Garth is actually going to be able to put aside decades of received conservative economic wisdom long enough to really fight against this threat to our society and our sovereignty, but he seems to be getting the point:

For a century and a half, we have resisted the siren song of wealth and influence and cultural assimilation that union with the United States would bring. We have stubbornly set our own course, even when it meant paying more in taxes, doing with fewer innovations and making the costly and difficult choices of being a bilingual, multicultural, tolerant and largely pacifist nation.

Is that now changing? Not with a bang? Not even with a whimper?

As I indicated, I do not know what to make of SPP. That alarms me.

My voters did not send me to the capital to worry about railway crossing safety, the crab fishery, ABM fees or appointment terms for senators, while the independence of our nation was being silently and steadily eroded by the unelected. My job is not to jump to conclusions, or raise false alarms. It is simply to defend my country. It may well be time to do so.

I truly hope that Turner takes up this cause with the same vigour as income trusts and pension splitting. Because once our little pit bull gets something like this in his teeth there won't be anything left of SPP and it's supporters but a few bloody scraps.